The history of the star: Dheneb 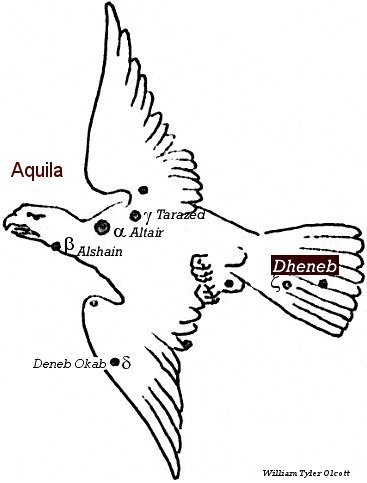 Influences: According to Ptolemy the influence of Aquila is similar to that of Mars and Jupiter. It is said to give great imagination, strong passions, indomitable will, a dominating character, influence over others, clairvoyance, a keen penetrating mind and ability for chemical research. It has always been associated with the sign Scorpio, and by the Kabalists with the Hebrew letter Vau and the 6th Tarot Trump "The Lovers." [Robson, p.29.]

"The Eagle, soars to the heights, the bird of mighty Jupiter carrying thunderbolts, it is a bird worthy of Jupiter and the sky, which it furnishes with awful armaments. This bird brings back the thunderbolts which Jupiter has flung and fights in the service of heaven. He that is born on earth in the hour of its rising, will grow up bent on spoil and plunder, won even with bloodshed; he will draw no line between peace and war, between citizen and foe, and when he is short of men to kill he will engage in butchery of beast. He is a law unto himself, and rushes violently wherever his fancy takes him; in his eyes to show contempt for everything merits praise. Yet, should perchance his aggressiveness be enlisted in a righteous cause, depravity will turn into virtue, and he will succeed in bringing wars to a conclusion and enriching his country with glorious triumphs. And, since the Eagle does not wield, but supplies weapons, seeing that it brings back and restores to Jupiter the fires and bolts he has hurled, in time of war such a man will be the aide of a king or of some mighty general, and his strength will render them important service". [Astronomica, Manilius, 1st century AD, book 5, p.341.]

The astrological influences of the star Dheneb

Note: Listed as Deneb in Robson’s book Fixed Stars and Constellations in Astrology.

Of the nature of Mars and Jupiter. It gives ability to command, liberality, success in war and beneficence. [Robson, p.158.]