The history of the star: Deneb Adige

from p.195 of Star Names, Richard Hinckley Allen, 1889.
[A scanned copy can be viewed on this webpage 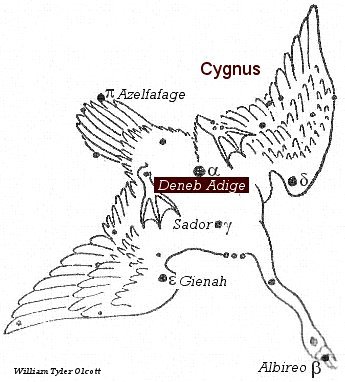 Alpha (α) Cygnus, Deneb Adige, is a brilliant white star in the tail of the Swan.

In the Alfonsine TablesArided appears, and is still frequently seen for this star, as Al Ridhadh and El Rided formerly were for the constellation. Referring to this last title, the 17th century Dutch astronomer Caesius termed alpha (α) Os rosae, the German Rosemund, although he also designated it as Uropygium, the Pope’s Nose of our Thanksgiving dinner-tables. [Uropygium from Ancient Greek ouropugion, “tail feathers” is actually the posterior part of a bird’s body, from which the tail feathers grow, sometimes called pope’s nose].

Alpha (α) also, and correctly enough, is Aridif, from Al Ridf, the Hindmost; but the 17th century German astronomer Bayer changed it to Arrioph, and Cary changed it to Arion

Arion is one of the alternative titles for this star, Alpha Cygnus, or Deneb Adige: Arion may refer to the mythological character Arion. Both Arion and Orpheus were famous lyre-players turned into swans at death. Arion, who lived in Corinth was the best citharist or lyre-player of his time. On his return from an artistic tour in Italy he was robbed by the crew of his ship and forced to cast himself into the sea. Against all odds, however, he landed on shore in Greece, riding on the back of a dolphin (Cygnus and Delphinus, the Dolphin, are adjacent constellations).

“Now Arion, not wishing to die in a meaningless way, decided to take for his shroud the sophisticated attire he used to wear at competitions, and with it on sing a final song to life, as swans generously do”. http://www.maicar.com/GML/Arion2.html

Another Arion, Arion, was the title of a black horse (an immortal horse born to the goddess Demeter after she was raped by Poseidon in the shape of a horse) and Cygnus would seem an unlikely placement for it, but it might relate to the fact that under those white feathers of swans is pure black skin?

“Hard by is the place allotted to the Swan: as a reward for the shape with which he [Jupiter or Zeus] snared the admiring Leda [see Leda], when, a god changed into a snow-white swan, he came down and offered his feathered form to the unsuspecting woman. Now too with outspread wings it flies among the stars” [Manilius, Astronomica, 1st century AD, book 1, p.31.]

The astrological influences of the star Deneb Adige

It is of the nature of Venus and Mercury, and gives an ingenious nature and a clever intellect that is quick at learning. [Robson, p.159.]

The star corresponds to a combination of Mercury and Venus influence and is therefore favorable for artistic and scientific pursuits which are carried out with the aim of gain. To prove this, it is interesting to find several well known artists and writers, who could make good money with their art, be it manifold activities in the acting art or achieving record sales of their printed works. [Fixed Stars and Their Interpretation, Elsbeth Ebertin, 1928, p.79.]

If setting: Deneb provides the native with an income from others, when setting. But Maternus asserts that badly aspected in this position, Deneb presages public punishment because of theft of the spoils of war. [Fixed Stars and Judicial Astrology, George Noonan, 1990, p.12.]