The history of the star: Sador 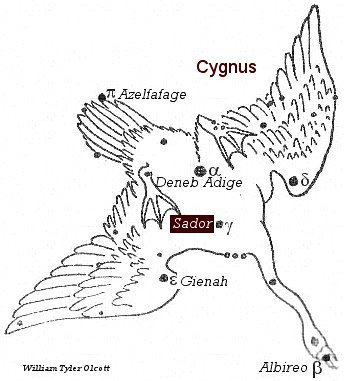 Gamma (γ) Cygnus, Sador, is a star in the breast of the Swan.

Zeta, epsilon Gienah, this star gamma, and delta also were an Arab asterism, Al Fawaris, “the Riders” alpha and kappa sometimes being added to the group.

Reeves said that in China it was Tien Tsin, the name of a city; but this generally was given to the group of four stars, alpha (α), beta (β), gamma (γ), and delta (δ).

“From this constellation shall flow a thousand human skills (artes ): its child will declare war on heaven and catch a bird in mid-flight, or he will rob it of its nestling, or draw nets up and over a bird whilst it is perched on a branch or feeds on the ground (swans had a reputation for being hostile to other birds). And the object of these skills is to satisfy our high living. Today we go farther afield for the stomach than we used to go for war: we are fed from the shores of Numidia and the groves of Phasis; our markets are stocked from the land whence over a new-discovered sea was carried off the Golden Fleece. Nay more, such a man will impart to the birds of the air the language of men and what words mean; he will introduce them to a new kind of intercourse, teaching them the speech denied them by nature’s law.