The history of the star: Albireo

from p.196 of Star Names, Richard Hinckley Allen, 1889.
[A scanned copy can be viewed on this webpage 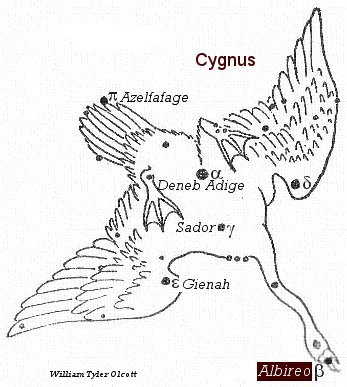 Beta (β) Cygnus, Albireo, is a double, magnitude 3.2 and 7, topaz yellow and sapphire blue star situated in the beak of the Swan.

Albireo, the now universal title, is in no way associated with Arabia, but apparently was first applied to the star from a misunderstanding as to the words ab ireo in the description of the constellation in the 1515 Almagest. Albireo in the Standard Dictionary undoubtedly is from a type error, as also may be Abbireo, Alberio, and Albeiro, which occasionally are used.

The Arabians designated beta (β) as Al Minhar al Dajajah, the Hen’s Beak, where it is still located on our maps. Menkar Eldigiagich and Hierizim were other titles.

Beta is one of the show objects of the sky, and its colors described as golden and azure, and “perhaps the most lovely effect of color in the heavens.”

A symbolic title for Albireo was “The song of the dying swan” [Robson, p.118.]

“Hard by is the place allotted to the Swan: as a reward for the shape with which he [Jupiter or Zeus] snared the admiring Leda [see Leda], when, a god changed into a snow-white swan, he came down and offered his feathered form to the unsuspecting woman. Now too with outspread wings it flies among the stars” [Manilius, Astronomica, 1st century AD, book 1, p.31.]

“In its own person the Swan hides a god (as being in the disguise of Jupiter) and the voice belonging to it; it is more than a bird and mutters to itself within. Fail not to mark the men who delight to feed the birds of Venus in pens on a rooftop, releasing them to their native skies or recalling them by special signs; or those who carry in cages throughout the city birds taught to obey words of command, men whose total wealth consists of a little sparrow (for such performing birds).” [Manilius,Astronomica, 1st century AD, book 5, p.331].

The astrological influences of the star Albireo

Of the nature of Venus and Mercury. It gives a handsome appearance, neatness, a lovable disposition and beneficence in despair. [Robson, p.118.]