The history of the star: Wazn

from p.167 of Star Names, Richard Hinckley Allen, 1889.
[A scanned copy can be viewed on this webpage 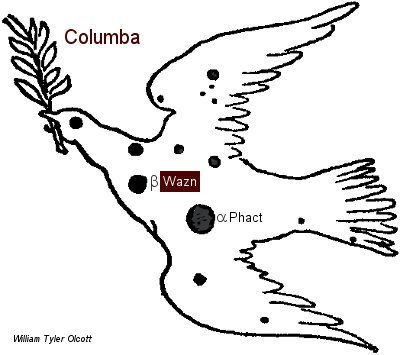 Beta (β) Columba, Wazn, is a star on the back of the Dove.

With alpha (α Phact) it was among the disputed Al Muhlifain; and Al Tizini (Arabian astronomer, first half of 16th century) additionally called both stars Al Aghribah, the Ravens, a title that the 17th century English orientalist Thomas Hyde assigned to a group in Canis Major

Royer, the French astronomer who published a star atlas in 1679, cut away a portion of Canis Major and constructed this constellation Columba Noachi. The part thus usurped was called Muliphein, “the two stars sworn by”, because they were often mistaken for Soheil, the Arabic name for Canopus, before which they rise: these two stars are now alpha (Phact) and beta (this star Wazn) Columba. Muliphein is recognized as comprehending the two stars called Had’ar, ground, and al-wezn, weight. [Reference have been made to Al Muhlifain (the swearing of an oath) as the stars gamma, zeta, lambda Argo (Alsuhail), delta Canis Major (Wezen), and alpha Centauri (Toliman)].

“11 Starres: of which there are two in the backe of it of the second magnitude, which they call the Good messengers, or bringers of good newes: and {p.168} those in the right wing are consecrated to the Appeased Deity, and those in the left, to the Retiring of the waters in the time of the Deluge.”

Heis locates alpha (α Phact) and beta (β Wazn) in the back; nu in the right wing, and epsilon (ε) in the left. Theta (θ) and kappa (κ) were included by the 13th century Persian astronomical writer Al Kazwini in the Arabic figure Al Kurud, the Apes.

In China they, were Sun, the Child; lambda (λ) being Tsze, a Son; and the nearby small stars, She, the Secretions.

The astrological influences of the constellation Columba

History: First recognized by Royer in 1679, but in existence some years before. It represents the dove sent by Noah from the Ark. [Robson, p.39.]