The history of the star: Toliman

from p.152 of Star Names, Richard Hinckley Allen, 1889.
[A scanned copy can be viewed on this webpage 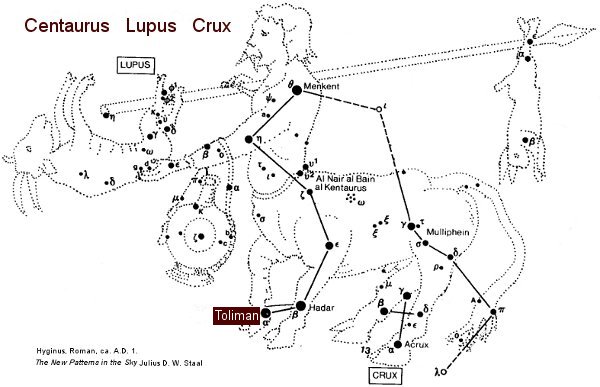 Alpha (α) Centaurus, Toliman, is a binary, white and yellowish star above the right front hoof of the Centaur.

Toliman or Bungula is the third largest star in the sky.

Baily’s edition of the 15th century Tartar astronomer Ulug Beg’s catalogue gives this star as Rigil Kentaurus, from Al Rijl al Kentaurus, the Centaur’s Foot; describing it as on the toe of the right front hoof, and the 17th century German astronomer Bayer so illustrated it. The 14th century Greco-Persian astronomer Chrysococca had the synonymous pous kontouros (Greek for ‘centaur’s foot’); and our Century Dictionary retains Rigel (Arabic for ‘foot’), although this is better known for the bright star in Orion (Rigel). Burritt’s Atlas of 1856 located on the left fore hoof a 4th-magnitude star that he wrongly lettered alpha (α); and above the pastern (a part of the horse between the fetlock joint and the hoof) our 1st-magnitude, also lettered alpha (α), with the title Bungula, which I find only with him and the Standard Dictionary. He gives no explanation of this, nor can I trace it further; it may be a word specially coined by Burritt from beta (β, Agena) and ungula (b-ungula), the hoof, although even in this the letter is wrong.

The German astronomer Ideler (1766-1846) said that this star alpha (α Toliman) and beta (β Agena) also have been the Arabic Hadar, Ground, and Wazn, Weight, as is explained at the star beta (β Agena); but he seemed at a loss as to the proper assignment of these words, although inclining to Hadar for beta (β, Agena).

These two stars were among the much discussed Al Muhlifain described at delta (δ, Wezen) and gamma (γ) Canis Major (Muliphein).

Alpha (α), Toliman‘s splendor naturally made it an object of worship on the Nile, and {p.153} its first visible emergence from the sun’s rays, in the morning at the autumnal equinox, has been connected by Lockyer with the orientation of at least nine temples in northern Egypt dating from 3800 to 2575 B.C., and of several in southern Egypt from 3700 B.C. onward. As such object of worship it seems to have been known as Serk-t

It bore an important part, too, in southern China as the determinant of the stellar division Nan Mun, the South Gate.

Alpha (α) lies in the Milky Way, 60° south of the celestial equator, culminating with Arcturus, but is invisible from north of the 29th parallel. It is of the greatest interest to astronomers, being, so far as is now known, the nearest to our system of all the stars.

“The Centaur, from his own nature assigns qualities to his progeny. Such a one will either urge on asses with the goad and yoke together quadrupeds of mixed stock or will ride aloft in a chariot; else he will saddle horses with a fighter or drive them into the fight [translator’s note; he will load horses with arms or drive them into arms, that is yoked to war-chariots].

“Another knows how to apply the arts of healing to the limbs of animals [translator’s note; these endowments reflect the identification of Centaurus as Chiron] and to relieve the dumb creatures of the disorders they cannot describe for his hearing.

“His is indeed a calling of skill, not to wait for the cries of pain, but recognize betimes a sick body not yet conscious of its sickness”. [Astronomica, Manilius, 1st century A.D, book 5, p.329].

The astrological influences of the star Toliman

Note: Alpha Centaurus, Toliman, is listed under Bungula in Robson’s book Fixed Stars and Constellations in Astrology, and also in Ebertin’s Fixed Stars and Their Interpretation

According to Ptolemy it is of the nature of Venus and Jupiter; and, to Alvidas, of Mars with the Moon and Uranus in Scorpio. Bungula gives beneficence, friends, refinement and a position of honor. [Robson, p.148.]

Relationships to female persons often seem spoiled, or an existing relationship is stricken by exceptional circumstances. Disturbances, riots, periods of storm and stress and revolt against curtailment of freedom. [Fixed Stars and Their Interpretation, Elsbeth Ebertin, 1928, p.68.]

With Saturn: Studious, well read, materialistic, self-seeking, favorable for gain, accumulation of money and property and legacies, though not without quarrels, favorable for marriage though some domestic disturbance, eldest child may be afflicted in early life. [Robson, p.149.]

With Uranus: Selfish; self-seeking, jealous of others’ success, dishonest, determined but indecisive in some things, loss through law, enemies and mercurial affairs, little prominence at home and greater reputation abroad, loss of friends, death through virulent disease. [Robson, p.149.]

With Neptune: Occult interests, psychic or mediumistic, deceitful, dishonest, many journeys and voyages often to the east of birthplace, rarely long in one place, occupation of a watery nature or connected with places of amusement and small speculations, favorable for gain and domestic matters, heavy business losses at end of life, death caused by Scorpio ailment. [Robson, p.149.]