The history of the star: Wezen 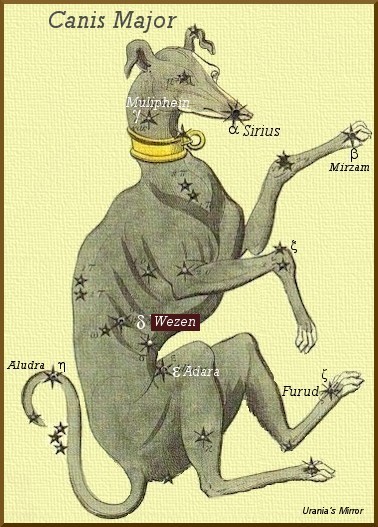 Wezen, from Al Wazn, Weight, “as the star seems to rise with difficulty from the horizon”; but the German astronomer Ideler (1766-1846) justly calls this an astonishing star-name.

It also was one of the Muhlifain particularly described under Columba

The name Al Muhlifain is used in reference to the following stars: gamma (Muliphein), zeta (Furud), lambda Argo Navis (Alsuhail), delta Canis Major (Wezen), and alpha Centaurus (Toliman), and also to the stars in Columba of which Allen p.167. says

Royer cut away a portion of Canis Major, and constructed Columba Noachi therewith in 1679. The part thus usurped was called Muliphein from al-muhlifein, the two stars sworn by, because they were often mistaken for Soheil, or Canopus, before which they rise: these two stars are now alpha and beta Columbae (Phact and Wazn). Muliphein is recognized as comprehending the two stars called Had’ar, ground, and al-wezn, weight.