The history of the star: Phact

from p.167 of Star Names, Richard Hinckley Allen, 1889.
[A scanned copy can be viewed on this webpage 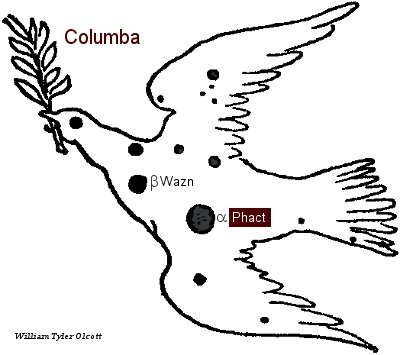 Alpha (α) Columba, Phact, is a star in the body of the Dove.

This star, alpha (α Phact), along with beta (β Wazn) were the “Good messengers” or “Bringers of Good News”, which were consecrated to the Appeased Deity. [Allen, under Wazn, p.167-168

Phaet, Phact, and Phad are all modern names for this, perhaps of uncertain derivation, but said to be from the Hadar (the Arabic hadar for “Earth” or “Ground”) already noted under the constellation. The stars of this constellation were cut away from Canis Major in 1679. The part thus usurped was called Muliphein “the two stars sworn by”. Muliphein is recognized as comprehending these two stars in Columba; this star alpha called Had’ar, ground, and beta (Wazn) al-wezn, weight.

The Chinese call it Chang Jin, the Old Folks.

Although inconspicuous, Lockyer thinks that it was of importance in Egyptian temple worship, and observed from Edfu and Philae as far back as 6400 B.C. And he has found three temples at Medinet Habu, adjacent to each other, yet differently oriented, apparently toward alpha (α Phact), 2525, 1250, and 900 years before our era: all these to the god Amen (Amun). He thinks that as many as twelve different temples were oriented to this star; but the selection of so faint an object for so important a purpose would seem doubtful.

The astrological influences of the constellation Columba

History: First recognized by Royer in 1679, but in existence some years before. It represents the dove sent by Noah from the Ark. [Robson, p.39.]

The astrological influences of the star Phact

Of the nature of Venus and Mercury. It gives beneficence, hopefulness and good fortune. [Robson, p.181.]

Phact (Noah’s pigeon), corresponds to the nature of Mercury-Venus, with a touch of Uranus. This fixed star in a good conjunction is supposed to give an appreciation for form and rhythmics as well as artistic talents, and is also supposed to confer ardent interest in science. Phact near the Sun is found in the cosmograms of the great mathematician Newton and the composer Richard Strauss. This fixed star gives a touch of genius and medium-ship. It is assumed that this fixed star will gain importance with the beginning of the “Aquarian Age”. [Fixed Stars and Their Interpretation, Elsbeth Ebertin, 1928, p.35.]