Pyxis was originally Pyxis Nautica, the Nautical Box, or Mariner’s Compass, called laBoussole by the French, Kompass by the Germans. (Not to be confused with the Pair of Compasses of the constellation Circinus).

The ultimate origin is Greek puxos, the box-tree, whence also the word pyx. French boite, box, cognate, and French boussole, mariners’ compass, is from the Italian diminutive bossola, “a boxe that mariners keepe their compasse in. Also taken for the compasse”. [The romance of words, Ernest Weekley, 1917, p.127]

“It is perhaps supposed to represent the compass of the Ship Argo Navis, though the Argo would not have had a compass, as the ancient Greeks did not use compasses for navigation. Note that Pyxis was not formally a part of Argo Navis; that is, the stars in it have their own independent Bayer designations (unlike Carina, Puppis and Vela which retained and split among themselves the Bayer designations from Argo).” http://en.wikipedia.org/wiki/Pyxis

Pyxis, a small box, from Latin pyxis, Greek puxis, Vulgar Latin buxem, a pyx was receptacle for coins, and pyxidium is a capsule; these words are related to the English word box, and box tree. The word boisterous comes via Old French boistos ‘clumsy, rough’ from Latin buxus ‘made from box-tree wood’. Latin buxeus, a pale yellow color like that of the buxus

According to Ovid the place, Cytorus, was famous in mythology as a source of boxwood []. Buxine is a steroid alkaloid obtained from the Buxus sempervirens, or common box tree. Buxine is identical to the much more well known ‘berberine’, present in Berberis vulgaris (common Barberry), also identical with bebeerine. Buxine is renown for its efficiency in easing illnesses with prominent fevers, and recommended as a substitute for quinine for treating malaria. [

The word pyx also pix is used to denote the box in which the Sacred Host, the consecrated bread or wafer of the Eucharist, is commonly kept in the Tabernacle []. A box office is a place where tickets are sold to the public for admission to a venue. 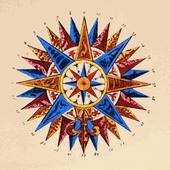 Pyxis is composed of stars that formed the constellation of Malus, the ship’s mast. The constellation, Pyxis, is in the position where the mast of the Ship, Argo Navis, should be. The mast of a sailing ship is a tall vertical pole which supports the sails (Vela).

It was thought that Malus, the mast of a ship, derived from Latin malus, apple or apple tree “This tree might have been sufficiently strong to answer the purpose of a mast in the ancient ships” [Valpy, p.247].

Isidore says “The mast is the pole on a ship that holds up the sail. It is called a mast (malus) because it has the shape of an apple (malum) at the top …” [The Etymologies of Isidore of Seville, 7th century AD, 374.]

Latin malum, means apple. ‘Adam’s Apple’ is the ‘voice box’ or larynx from Greek larunx, the box containing the vocal cords. The larnax (plural larnakes) may be a related word, it is a type of closed box or coffin often used as a container for human remains in ancient Greece, or ashes of the cremated []. Folklore has it that the ‘forbidden fruit’ offered by Eve got stuck in Adam’s throat, hence the prominent voice box in men.

The forbidden fruit was of the tree of knowledge of good and evil. Pyxis is a compass. The expression ‘moral compass’ is the notion that prompts people to choose and behave in certain ways. The mariner’s compass consists of a magnetic needle freely suspended so that in the earth’s magnetic field it turns until aligned with the magnetic north and south poles. The terms positive and negative are sometimes used for the poles of a magnet. The positive pole is that which seeks geographical north. The north had positive or good connotations, and the south had negative or bad connotations. Dhruva, in Hindu mythology, was the north Pole Star (in Ursa Minor), his name is related to the words ‘true’ and ‘truth’ (from I.E. deru-). The south pole is in the constellation Octans

St. Elmo is the patron saint of sailors. The meteorological phenomena, St. Elmo’s fire, occurs during thunderstorms at sea. It is actually the brush-discharge of electricity seen mostly around mastheads and described as ghostly blue flames that light up the masts like candles []. In ancient Greece, the appearance of a single ball of fire was called Helena and two were called Castor and Pollux (the Twins, Gemini). It was a good omen because it was a sign that the storm was starting to abate. There is speculation on the net that what Moses observed in the burningbush on Mount Sinai was actually St Elmo’s fire []. [The word box is related to bush, ‘to furnish or line with a bushing‘ (see above); bush, ‘a shrub’ is not a recognized cognate of bush.] As masts on ships are not consumed by St Elmo’s fire; the biblical burning bush was not consumed by the ‘fire’. The voice from the burning bush said “I am the Elohim”. To me the word Elohim resembles Elmo…

Pyxis used to be called Malus, the Mast. Allen in Star Names says:

“La Caille formed from stars in the early subordinate division Malus, the Mast, PyxisNautica, the Nautical Box or Mariner’s Compass, the German SeeCompass, the French Boussole or CompasdeMer, and the Italian Bussola; and this is still recognized by some good astronomers as Pyxis“.

Pyxis (Latin for box) is a minor southern constellation, located partly in the Milky Way, and formed by La caille under the name Pyxis Nautica in 1752 from stars in the mast of Argo Navis, the Ship, to honor the invention of the magnetic compass used on ships.