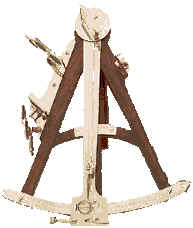 The octant, from Latin octans, is an instrument based on the principle of the sextant (another constellation Sextans) but employing only a 45° angle, and used as an aid in navigation.

The South Pole is in the constellation Octans. Right at the Poles, the Sun only rises once and sets once each year; the Sun shines for half the year and it is dark for the other half of the year. This makes a year like one long day; six months of light and six months of darkness. The Sun reaches the point farthest south of the celestial equator about December 22nd, when the Sun is highest in the sky at the south pole.

The earth rotates once a day on its axis, an imaginary line that passes through Earth from its north pole to its south pole. To avoid confusion between geographic and magnetic north and south poles, the terms positive and negative are sometimes used for the poles of a magnet. The positive pole is that which seeks geographical north, the negative seeks the bottom or nadir

The imaginary line through the north and south poles does not stand upright with respect to the plane of the earth’s orbit around the Sun. This imaginary line or pole tilts by 23.27 degrees producing the ecliptic; the path along which the Sun appears to move as viewed from the earth. If this line or axis was standing upright, or vertical, the Sun’s path would be the equator and there would be no ecliptic. The Sun’s path would then have the shape of a zero – O. But because of this orbital tilt the invisible path of the Sun has the shape of the figure . The noontime position of the Sun in the sky, plotted over a year, produces a figure eight-shaped curve called an analemma. Its lowest and highest points are, respectively, the winter and summer solstices. See here for pictures and explanation of the analemma. The slow wobble of the spinning earth’s axis produces the phenomenon of the precession of the equinoxes that runs in approximately 25,920 year cycles, called eons in astrology (or ‘Platonic’ Years).

In Egyptian mythology, the Ogdoad are the eight deities worshipped in Hermopolis, represented as four couples, four male and four female, that existed before the creation of the Sun-God. The Ogdoad created a mound that rose from the primeval waters, and on this they formed an egg from which the young Sun-God emerged. From this egg, the Sun-God Atum was born, and he began the process of creating the world.

Pythagoras stated that the octave gave our planet its shape, and he said that certain experiments have shown that when an octave is sounded the sand on a plate of glass arranges itself in the form of a circle [].

The adjoining constellation Mensa is the table mountain on the Cape of Good Hope, the next land area south is Antarctica. Ant-Arctica, where the South Pole is, means opposite the Bears – arktos, bear. (The Little Bear, Ursa Minor, contains the star Polaris which marks the North Pole).

The symbol hash   or earlier octalthorpe, or octothorn; so called because there are eight points, or thorns, sticking out of it.

“The baptism font is always octagonal, and the baptistry itself often was []”. 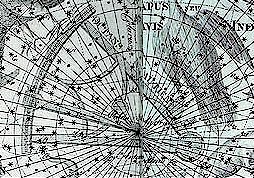 OctansHadleianus, Hadley’s Octant (an instrument to determine stellar positions), now known simply as Octans, is a faint constellation of the southern hemisphere that contains the south celestial pole. Formed by La Caille in 1752 in recognition of the octant invented in 1730 by John Hadley. The octant, a forerunner of the sextant (constellation Sextans) is a navigational tool used to determine the altitude of a star, and thus one’s latitude on the Earth.

It is the French Octant, the German Oktant, and the Italian Ottante. The French edition of Flamsteed’s Atlas has it as ’OctansReflexion

The constellation is noteworthy as marking the south pole, its 5.8-magnitude alpha being about ¾ of a degree away. The star, Sigma Octans (not listed here), is the Pole Star of the South, lying approximately 1 degree from the pole itself. Unlike Ursa Minor‘s Polaris, there is no bright star near the South Pole. The northern pole star, Polaris, is 20 times brighter.

Ancient references to a south pole are of course infrequent; Ovid, however, makes Phoebus allude to it in his instructions to Phaethon; Vergil mentions it as in our motto; Creech thus renders from Manilius:

To this above and shines with equal Stars;

and Pliny tells us that the Hindus had given it a name, Dramasa [‘Diamasa’ is also quoted as an Indian name for the south pole.]

The Arabs, too, seem to have had some knowledge of it, for they imagined that, like its northern counterpart, it exercised a healing power on all afflicted persons who would attentively observe it.

The early navigators commented more or less correctly on the blankness of the heavens in this region, and Peter Martyr wrote:

Pigafetta, in his description of the Magellanic Clouds:

Between these, are two stars not very big, nor much shinning, which move a little: and these two are the pole Antartike, —

probably the colored stars beta and gamma Hydri of about the 3d magnitude; and Camoes:

{Page 297} which probably refers to the same thing, but which his translator. Aubertin claims as an allusion to the Coalsack, or Sootbag. Vespucci, on the other hand, strangely stated, in his Lettera of 1505, that “the stars of the pole of the south . . . are numerous, and much larger and more brilliant than those of our pole”; and that he saw in the southern sky about twenty stars as bright as Venus and Jupiter. Ideler’s comment on Vespucci, in this connection, is “the greater part of his news is of this reliable character !” Even now it is the popular opinion that the South is richer in stars than is the North; Tennyson expressing this in LocksleyHall

Allen writes under the constellationUrsa Major

Before the observations of the navigators of the 15th and 16th centuries the singular belief prevailed that the southern heavens contained a constellation near the pole similar to our Bear or Wain; indeed, it is said to have been represented on an early map or globe. Manilius Wrote:

To this Above, and shines with equal stars;

With Bears averse, round which the Draco twines;

and Al Biruni repeated the Sanskrit legend that at one time in the history of the Creation an attempt was made by Visvamitra to form a southern heavenly home for the body of the dead king, the pious Somadatta; and this work was not abandoned till a southern pole and another Bear had been located in positions corresponding to the northern, this pole passing through the island Lunka, or Vadavamukha (Ceylon). The Anglo-Saxon Manual made distinct mention of this duplicate constellation “which we can never see.” Towards our day Eden, describing the “pole Antartike,” said: “Aloysius Cadamustus [Venetian navigator in the service of Portugal] written in this effect: We saw also six clear bright and great stars very low above the sea. And considering their stations with our compass, we found them to stand right south, figured in this manner… We judged them to be the charlotte or wain of the south: But we saw not the principal starre, as we could not by good reason, except we should first lose the sight of the north pole”.

And, quoting from Francisco Lopes of 1552: “About the point of the South or pole Antarctica, they saw a little white cloud and four stars like unto a cross (Crux) with three other joining thereunto, which resemble our Septentrion (Ursa Major), and are judged to bee the signs or tokens of the south exeltree of heaven.”

What is referred to here is not known, for, although the figure represented is that of the Southern Cross (Crux), this constellation always is upright when on the meridian, and, as the observation was made in latitude 14° or 15°, [Page 437} its base star was plainly visible. Still it would seem that some early knowledge of the Cross was the foundation of this idea of a southern Wain.