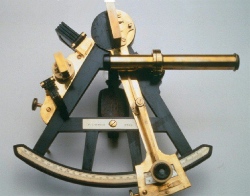 A sextant is a navigational instrument containing a graduated sixty-degree arc, sixth part of a circle, used for measuring the altitudes of celestial bodies to determine latitude and longitude. Or a sextant is an instrument used to measure the angle between any two visible objects. Its primary use is to determine the angle between a celestial object and the horizon []. The alpha and beta stars of Sextans are right on the zero latitude line (zero declination) on the celestial equator. Above the alpha star of Sextans, Regulus, the alpha star of Leo, straddles the ecliptic line.

Christians saw a representation of the Sudarium Veronicae, the sacred handkerchief of Saint Veronica, in the stars of Sextans, the face-cloth that bears the resemblance of the face of Jesus imprinted on it (not the shroud of Turin that covered his body in the tomb). Saint Veronica was a pious woman of Jerusalem, who moved with pity as Jesus carried his cross to Golgotha, gave him her handkerchief that he might mop the sweat from his forehead. Jesus accepted the offering and after using it, handed it back to her, the image of his face miraculously impressed upon it []. The event is commemorated in the sixth Station of the Cross with Veronica depicted holding a cloth with the face of Jesus face imprinted on it. Saint Veronica is the patron of linen-drapers and washerwomen.

The words sweat and sudarium come from the Indo-European root *sweid ‘Sweat’. Derivatives: sweat (from Old English swetan), sudorific, sudoriferous, (from Latin sudor), sudatory, sudatorium (hot-air room used for sweat baths), suint (a natural grease formed from dried perspiration found in the fleece of sheep, used as a source of potash), exude, transude (to pass through pores or interstices in the manner of perspiration), hidrosis (the formation and excretion of sweat, from Greek hidros, sweat). [Pokorny 2. sweid– 1043. Watkins

A sudatorium was an ancient Roman bath-house, a room for sweating in, resembling European saunas, jacuzzis, and natural sweat lodges near hydrothermal vents of volcanic craters (Crater is an adjacent constellation).

This constellation, Sextans Uraniae was created with Urania the muse of astronomy in mind. It was placed on the Hydra‘s back and named by Hevelius “as a sort of commemoration of the destruction of his instruments when his house at Dantzic was burnt in September, 1679; or, as he expresses it, when Vulcan overcame Urania” [Allen, Star Names]. “Ourania (or Urania) was one of the nine Muses, the goddesses of music, song and dance. In Classical times Ourania came to be titled the muse of astronomy and astronomical writings and as such was usually depicted pointing to a globe with a staff” []. Uranography is the branch of astronomy concerned with mapping the stars, galaxies, or other celestial bodies. The constellation Sextans represents the astronomical sextant used by Johannes Hevelius to compile one of the first accurate star maps

The Sudarium Veronicae, the face-cloth used to mop the sweat from the face of Jesus, is often referred to as a napkin on the internet. Sextans Uranae represents the sextant used by Johannes Hevelius to compile one of the first accurate star maps. A map in Latin meant a napkin, a cloth on which maps were drawn. Napery is household linen; Saint Veronica is the patron saint of linen-drapers and washerwomen []. These words come from the Semitic root *npy ‘To sift’. Derivatives: apron, map, mop, napery (household linen), napkin, nappe (a sheet of water flowing over a dam or similar structure), nappy, from Latin mappa, originally napkin, cloth, said by the Roman author Quintilian to be of Punic origin, perhaps from Phoenician (Punic) *mappe, from Common Semitic *manpay– or *manpiy-, sieve, fine cloth.

“Since fine-throned Ourania has sent me from Pieria [cult centre of the Mousai in northern Greece] a golden cargo-boat laden with glorious songs.” – Greek Lyric IV Bacchylides, Frag 16

“For the name of each Mousa, they say, men have found a reason appropriate to her: … Ourania, because men who have been instructed by her she raises aloft to heaven (ouranos), for it is a fact that imagination and the power of thought lift men’s souls to heavenly heights.” – Diodorus Siculus, Library of History 4.7.1

“Corymbus of Helicon … formerly the Musae’s friend, to whom Uranie herself, knowing full well his Stygian destiny, had long foretold his death by the position of the stars [the goddess presided over astronomy as well as astrology].” – Statius, Thebaid 8.548

“[the Mousa] Ourania, who knew all the courses of the stars, a revolving globe like the speckled form of Argos.” – Nonnus, Dionysiaca 33.55 [Argos, Argus, became the Peacock, Pavo, representing the starry sky]

Sextan in Latin also means a ‘sixth’, and SEX is the abbreviation for this constellation, and resembles our word sex from Latin sexus. Latin sex (six), and sex from Latin sexus (the condition of being male or female), are not recognized cognates. According to Ayto Latin sexus has traditionally been explained as a relative of Latin secare ‘cut’ (source of English section, sector, and insect, the creatures with six legs, etc), as if it denoted etymologically that ‘section’ of the population which is male or female. The use of the word sex for ‘sexual intercourse’ was first recorded in the works of D H Lawrence.

The fact that the alpha and beta stars of Sextans are right on the zero latitude line on the celestial equator might have some significance; as though they were marking the coming together of the two hemispheres, the north/south, and by extension the masculine/feminine natures of the spheres of the heavens, that are divided by the celestial equator.

“The number six is expressed either in the hexagon [hex- from Greek hex, six], or, better still, in the six-pointed star formed by a pair of inverted triangles. This, in Hindu terms, represents the lingam penetrating the yoni” [The Penguin Dictionary of Symbols].

Masonic author, Albert Mackey, tells us of the sexual connotation of the hexagram:

“The triangle pointing downward is a female symbol corresponding to the yoni and the upward pointing triangle is the male, the lingam. When the two triangles are interlaced, it represents the union of the active and passive forces in nature; it represents the male and female elements.” [Mackey, The Symbolism of Freemasonry, 1869, p.195 –

The sixth commandment forbids adultery; sexual intercourse with a partner other than the lawful spouse.

On the sixth day of creation God created man as male and female, and made them in his image, and after his likeness. The image of Jesus’ face miraculously impressed upon Veronica’s napkin might relate in some way to this?

In Hinduism the Sacral Chakra is symbolized by a lotus with six petals, Svadisthana, “located in the sacrum (hence the name) and is considered to correspond to the testes or the ovaries that produce the various sex hormones involved in the reproductive cycle.” http://en.wikipedia.org/wiki/Chakra