Circinus is from Latin circinus, pair of compasses, from circus, circle (not to be confused with the Mariner’s Compass of the constellation Pyxis). A compass, also called a pair of compasses, or a drafting compass, is a technical drawing instrument that can be used for inscribing circles or arcs. It can also be used as a tool to measure distances, in particular on maps, for mathematics, drafting, navigation, building, carpentry, and other purposes.

Two of the principal symbols always found in a Masonic Lodge are thesquare and compasses. An adjacent constellation,Norma, is the Square. The two together are the emblems of masonry, and the symbol of Freemasonry. 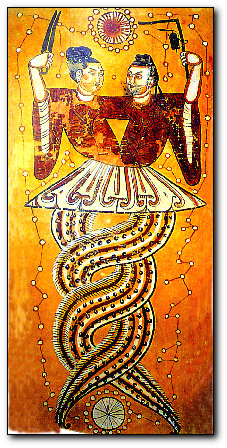 There is an older association between these two objects. An ancient painting of Nüwa and Fuxi unearthed in Xinjiang, holding the tools of creation; the compass and square, and surrounded by constellations. Hugh Nibley gave a lecture in 1975 on “Sacred Vestments” in which he says “In the underground tomb of Fan Yen-Shih, d. A.D. 689, two painted silk veils show the First Ancestors of the Chinese, their entwined serpect bodies rotating around the invisible vertical axis mundi. Fu Hsi holds the set-square and plumb bob … as he rules the four-cornered earth, while his sister-wife Nü-wa holds the compass pointing up, as she rules the circling heavens. The phrase kuci chü is used by modern Chinese to signify “the way things should be, the moral standard”; it literally means the compass and the square. (pg. 115)”.

Giorgio De Santillana, Hertha Von Dechend, in Hamlet’s Mill, p.272, “The two characters surrounded by constellations are Fu Hsi and Nu Kua, i.e., the craftsman god and his paredra, who measure the ‘squareness of the earth’ and the ’roundness of heaven’ with their implements, the square with the plumb bob hanging from it, and the compass. The intertwined serpent-like bodies of the deities indicate clearly enough, although in a peculiar “projection,” circular orbits intersecting each other at regular intervals.” [source 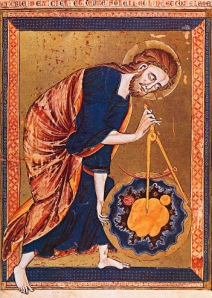 Medieval illustration showingGod as an architect, tracing out the world with a geometer’s compass.

“The circle was symbolized in art by God holding a pair of compasses, a common motif in the Middle Ages. The art historian Ernst Gombrich credits a passage from the Old Testament as the inspiration for these portrayals. In Proverbs, Chapter 8 par. 27, Wisdom put forth her voice;” “When he established the heavens I was there: when he set a compass upon the face of the deep:” [Sacred Geometry

The word Circinus comes from the reduplicated form *ki-kr-o- of the Indo-European root *sker- ‘To turn, bend’. Derivatives: circa, circadian (a pattern repeated approximately every 24 hours), circinate (ring-shaped. Rolled up in the form of a coil with the tip in the center, as an unexpanded fern frond), Circinus (compass, a constellation in the Southern Hemisphere), circle, circum-, circus, cirque, search (from Latin circare, to go around in circles), cricoid (pertaining to the cartilage of the larynx), research, recherché (uncommon, rare), (these words from Greek kirkos, krikos, a ring), Circus (from Greek krikos), circuit, circulate. [Pokorny 3. (s)ker- 935. Watkins] The harrier hawk is from the genus circus and flies in circles.

“The compass (circinus) is named because it makes a circle (circulus) when it is turned. This technique is carried out with a doubled string, which when single (i.e. undoubled) had been stretched across the width (i.e. the diameter desired). The point in the middle of the compass (i.e. of the circle) is called the center (centrum, i.e. …) by the Greeks – everything converges on this middle point.” [The Etymologies of Isidore of Seville, 7th century AD, p.382.]

“The circus was chiefly dedicated by the pagans to the sun god, whose shrine was in the middle of the racetrack and whose effigy shone out from the gable of the shrine, because they did not think that he, whom they believed was in the open, ought to be worshipped under a roof. A circus is the whole space that horses would race around. The Romans think that it was called circus from the ‘circuit‘ (circuitus) of horses, because there the horses race around (circum) the turning-posts. But the Greeks say it was named after Circe, daughter of the sun god, who founded this kind of competition in honor of her father, and from her name they argue that the term circus derived. Moreover, she was a sorceress and a witch and a priestess of demons; in her conduct we may recognize both the working of the magical arts and the cult of idolatry.” [The Etymologies of Isidore of Seville, 7th century AD, p.367.]

In Greek mythology Perdix was the inventor of the circinus (along with the saw made from the spine of a fish), “And he was first to make two arms of iron, smooth hinged upon the center, so that one would make a pivot while the other, turned, described a circle.” [Ovid

In Greek mythology, Circe or Kirke, daughter of Helios the Sun, and Hecate (perhaps the dark phase of the Moon []), was a enchantress living on the island of Aeaea. She was renowned for her knowledge of drugs and herbs, and was skilled in the use of all charms, potions, and spells and chants. Around the island prowled fawning lions and wolves and other wild animal which were tame like circus animals. She invited Odysseus’ crew to a feast, the food laced with one of her magical potions, and she turned them all into pigs with her wand. For one year Odysseus and Circe were lovers on her island. “A year we lingered in the land of Circe“; while the sun circled. A ‘year’ can be understood as a circuit, a going around.

Circe, also had the titles Pharmakeia, polypharmake [Homer]. Circe was buried on one of the islands of the Pharmacusii, or Pharmakoussai [Strabo], group in the Aegean Sea. Pharmacos means sorcerer related to our word pharmacy, but it also has another meaning, a type of scapegoat or outcast often for being a non-conformist (outside the circle perhaps). Socrates “is often portrayed as a pharmakeus. But Socrates also becomes Athens most famous ‘other’ pharmakos, the scapegoat” []. And Circe herself was an outcast for poisoning her husband, seizing his throne, and becoming a cruel ruler, she was deposed and fled. “Two men, the Pharmakoi, were led out as if to be sacrificed as an expiation. Each man took with him his own pharmakos, a young pig in the rites of purification in Eleusis in ancient Greece. The term ‘pharmakos’ later became the term ‘pharmacos’ which refers to a poisoner, a magician, or a sorcerer. A variation of this term is ‘pharmacon‘ meaning either a magical substance or drug” [].