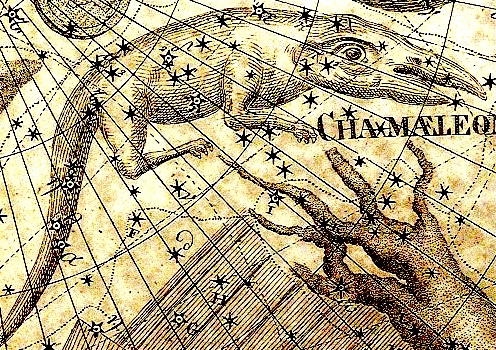 This constellation, Chamaeleon, is adjacent to Octans which contains the South Pole. The name ‘chameleon‘ means ‘Earth lion’, or ‘lion of the earth’, and is derived from the Greek words chamai (on the ground, on the earth) and leon (lion).

Main features of the chameleon: Skin changes color to camouflage itself. The eyes can move in different directions simultaneously, can rotate to observe two different objects simultaneously giving a full 360-degree arc of vision around their body. Long tongues, sometimes longer than their own body length, with suction cap at the tip.

The theoichthonioi, were the gods of the nether or underworld.

“The word ‘human‘ itself is from Latin humanus, an adjective cognate to homo, both derived from Proto-Indo-European language dhghem ‘earth’. Compare Hebrew adam, meaning ‘human’, cognate to adamah, meaning ‘ground’. (And compare Latin humus, meaning ‘soil’.) Both homohumanushumus and adamadamah share a conjectured Nostratic superroot, ad-ham” []. “Adam was, as his prototype Atum in Egypt, the first formation in the worlds above of the mind-in-matter combination. He was the archetypal model in ethereal mold of the earthly man to be” [].

The word chameleon can be resolved into ‘the human lion’ – ‘the humus lion’. 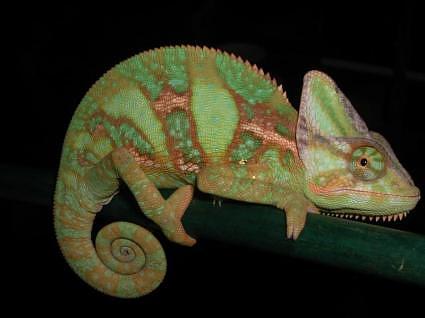 Chameleon is the German Chamaleon, the French Cameleon, and the Italian Camaleonte, is a small and unimportant constellation below Carina, Octans separating it from the south pole. It was first published and figured by Bayer among his new constellations from observations by navigators of the preceding century. Pontanus, in Chilrnead’s Treatise, included it with Musca as “the Chamaeleonwiththeflie“; but Julius Schiller entirely changed its character by combining it with Apus and Musca in his biblical Eve

None of its stars seem to be named except in China, where some of the larger were SeaouTow, a small Measure or Dipper, that our alpha, theta, eta, iota, epsilon, mu, and mu well show.