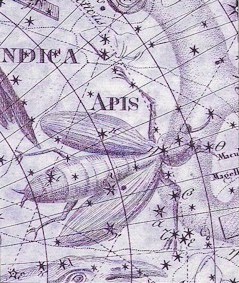 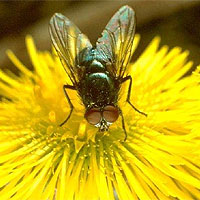 Fly Agaric: Mushrooms, depending on the genera, have their own specific chemical properties that can target specific areas of the brain. One is the Amanita muscaria, commonly called Fly Agaric, whose name may derive from the Greek muagros (fly hunter) [], a bright red cap with white polka dots; the toadstool. Muscarine is a trace compound, and was first isolated in the fly agaric, Amanita muscaria. Muscarinic receptors are found in the parasympathetic nervous system and are involved in a large number of physiological functions including heart rate and force, contraction of smooth muscles and the release of neurotransmitters. In the brain, muscarinic receptors participate in many important functions such as learning, memory, and the control of posture.

Belzebub, Baal Zebul, Baalzebub, or ‘Beelzebub, is depicted as both a god of flies and also as a fly.

“Belzebub was the idol of Accaron, and the word is translated as ‘man of flies,’ for a fly is called zebub. The most impure idol, therefore, was called ‘man of flies’ because of the filth of idolatry, or its uncleanness” [The Etymologies of Isidore of Seville, 6th century A.D., p.185.]

Apomyios (from Greek apo-myia, ‘away from flies’), a surname given by the Cyrenians to Zeus, for delivering Hercules from flies during sacrifice. In his 10th Labor Hercules Hera sent a swarm of flies to attack the cattle of Geryon []. Sacrifices were yearly offered to Zeus Apomyios

Flies naturally hang around sacrifices and eat the food laid out as offerings to idols. Baalzebub, Baal Zebul, The -zebub -zebul comes from the Semitic root *zbl, ‘To carry, raise, exalt’; Northwest Semitic noun *zabul-, prince. the word Jezebel is related, from Hebrew izebel, ‘where is the prince’?, from zebel, akin Zebul, a name meaning “prince”, lord prince, name of a Philistine god who Jezebel encouraged the worship of, the Phoenician god Baal [AHD]. In Revelation 2:20, a prophecy is uttered against a prophetess in the church of Thyatira named Jezebel. She is accused of inducing members of the church there to commit acts of sexual immorality and to eat food sacrificed to idols.

This constellation should also represent the mosquito, a Spanish word, diminutive of mosca, ‘fly’, from Latin musca. Mosquitos are of the family Culicidae, the Latin word for mosquito (also called gnats) was culex

“The gnat (culex) is named from ‘sting’ (aculeus) because it sucks blood, for it has a tube in its mouth, like a needle, with which it pierces the flesh so that it may drink the blood” [The Etymologies of Isidore of Seville, 6th century A.D., p.270.]

Mythology has one story about a fly: Metis was the first wife or mistress of Zeus, she transformed herself into various shapes and when in the shape of a fly Zeus swallowed her. Metis was already pregnant with Athena. Dwelling inside of Zeus Metis immediately began making a helmet and robe for her fetal daughter. The hammering as she made the helmet caused Zeus great pain in his head. Hephaestus cut open Zeus’s skull with an axe and Athena leaped out fully grown and armed []. Metis meant ‘cunning’ or ‘skill’ in Ancient Greek. Metis gave Zeus the drug, an emetic, which forced Cronus to vomit all the children he swallowed (flies vomit digestive juices onto their food).

The male sparrow-hawk (Accipiter nisus) was formerly called a musket (from root mu-, Musca), and the gun called a musket, operated by a musketeer, was named after the bird.

Musca Australis vel Indica, the Southern or Indian Fly, the French Mouche Australe ou Indienne, the German Sudliche Fliege, and the Italian Mosca Australe, lies partly in the Milky Way, south of the Cross (Crux), and east of the Chamaeleon

This title generally is supposed to have been substituted by La Caille, about 1752, for Bayer’s Apis, the Bee; but Halley, in 1679, had called it MuscaApis; and even previous to him, Riccioli catalogued it as ApisseuMusca. Even in our day the idea of a Bee prevails, for Stieler’s Planisphere of 1872 has Biene, and an alternative title in France is Abeille

The modern Chinese translate Bayer’s title as MeihFung, and have so known it since the 16th century.

Gould assigned to it 75 stars, of magnitudes from 2.9 to 7; these culminating, with the Cross (Crux), about the middle of May.292

When the Northern Fly was merged with Aries by the International Astronomical Union (IAU) in 1929, Musca Austrailis was given its modern shortened name Musca