The history of the star: Zuben Elakrab 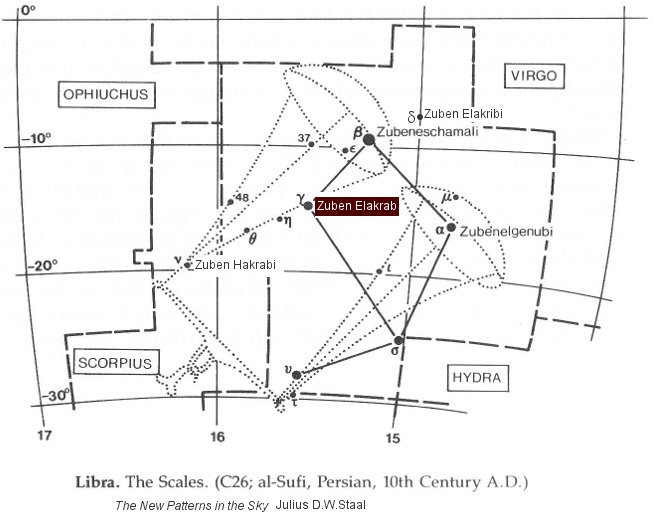 Gamma (γ Libra), Zuben Elakrab, is a fourth-magnitude star in the middle of the northern Claw (Zubenelschemali) or scale of Libra.

Wikipedia says gamma Libra “also has the traditional name Zuben-el-Akrab, meaning “Shears of the Scorpion”. The name is a modification of the Arabic al-Zuban al-Aqrab. Alternate modifications of the phrase include Zuben el Hakrabi and Zuben Hakraki.”

The two scales of Libra are marked by two stars which Bullinger (in The Witness of the Stars) called the Price of the Deficient (α Zuben Algenubi) balanced by the Price which Covers (β Zubenelschemali) and added “but there is a third star, gamma, below, towards Centaurus and the Victim slain (Lupus), telling, by that and by its name, of the conflict by which that redemption would be accomplished. It is called Zuben Akrabi or Zuben al Akrab, which means ‘the price of the conflict!'” [The Witness of the Stars, Ethelbert W. Bullinger, 1893]

Alpha (α  Zuben Elgenubi) marked the nakshatra (Hindu Moon Mansion) Vicakha, Branched, under the rule of Indragni, the dual tutelar divinity Indra and Agni. This lunar station was figured as a decorated Gateway, and in later Hindu astronomy its borders were extended to include this star gamma (γ Zuben Elakrab) and iota (ι), thus completing the resemblance to the object for which the asterism was named; iota (ι) was the junction star with Anuradha. [Star Names, p.275]

Influences of 14th Hindu Moon Mansion Vicakha or Vishaka: Ruled by Jupiter. A soft and sharp asterism belonging to the lowest caste and producing mixed effects. Those born on the lunar day will be religious, dealers in produce, and fond of red flowers. With Moon here at birth native will be jealous, mean, miserly, good-looking, clever in speech, and quarrelsome. Rules cotton fields and the nipples. [Robson, p.81.]