The history of the star: Zuben Elgenubi

from p.275 of Star Names, Richard Hinckley Allen, 1889.
[A scanned copy can be viewed on this webpage 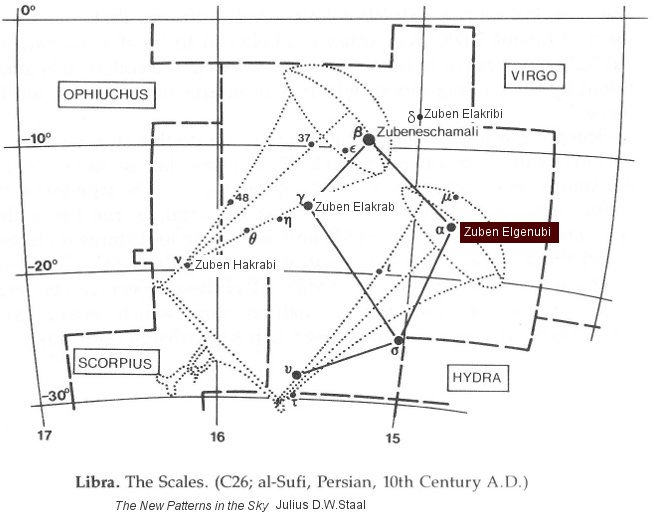 Alpha (α) and alpha (α), Zuben Elgenubi, is a widely double star; 3 and 6 magnitude, pale yellow and light gray, in the southern Claw of the Scorpion in constellation of Libra

This star alpha (α), Zuben Elgenubi, is the Southern Scale of Libra (beta β, Zubenelschemali, is the Northern Scale.)

The early Greeks did not associate Libra’s stars with a “Balance” or “Scales”, to them it was the Chelae; the Claws of the Scorpion. In Greek astronomy alpha (α) and alpha (α) were Chele notios, the Southern Claw (of the Scorpion, Scorpius), from the name of the whole division now our Southern Scale.

Our Zubenelgenubi is from Al Zuban al Janubiyyah, the exact Arabian equivalent of the second-century Greek astronomer Ptolemy’s term; but Zubenelgubi and Janib are both wrong, and Zubeneschamali is worse, for it plainly belongs to beta (β Zubenelschemali).

English writer on globes John Chilmead (circa 1639) called it Mizan Aliemin from an Arabian title for the constellation of Libra; yet that people also knew it as Al Kiffah al Janubiyyah, the Southern Tray of the Scale, from which came the Arabo-Latin Kiffa australis of modern lists; and as Al Wazn al Janubiyyah, the Southern Weight, distorted by the Italian astronomer Riccioli (1598-1671) into Vazneganubi. The Lanx meridionalis of two centuries ago is synonymous with the first of these Arabian designations.

The alphas (α, α, Zuben Elgenubi) and beta (β Zubenelschemali) constituted the 14th manzil (Arabic Moon Mansion), Al Zubana, although the Persian astronomer Al Biruni (973-1048 A.D.) said that this title should be Zaban, “to push,” as though one of the stars were pushing away the other (!); while alpha (α  Zuben Elgenubi) marked the nakshatra (Hindu Moon Mansion) Vicakha, Branched, under the rule of Indragni, the dual tutelar divinity Indra and Agni. This lunar station was figured as a decorated Gateway, and in later Hindu astronomy its borders were extended to include gamma (γ Zuben Elakrab) and iota (ι), thus {276} completing the resemblance to the object for which the asterism was named; iota (ι) was the junction star with Anuradha.

These two alphas (α, α, Zuben Elgenubi) were the determinants of the 21st Babylonian ecliptic constellation Nuru-sha-Shutu, the Southern Light; and some have included beta (β Zubenelschemali) and gamma (γ Zuben Elakrab) with them in the Euphratean Entena-mas-luv, the Star of the Tail-tip, as though they marked that part of the enormous, but undetermined, ancient Hydra of Chaldea, the very early Afr of Arabia.

Robson (Fixed Stars and Constellations in Astrology) says this star, the “Scale South”, is symbolically called “the Insufficient Price”. The two scales of Libra were the Price of the Deficient (α, Zuben Algenubi) balanced by the Price which Covers (β, Zubenelschemali).

This star alpha (α, α, Zuben Elgenubi), and beta (β Zubenelschemali), constituted the 14th manzil (Arabic Moon Mansion), Al Zubana, although the Persian astronomer Al Biruni (973-1048 A.D.) said that this title should be Zaban, “to push,” as though one of the stars were pushing away the other (!)

With Moon transiting here: buy cattle but do not navigate. [Robson, p.72.]

Alpha (α  Zuben Elgenubi) marked the nakshatra (Hindu Moon Mansion) Vicakha, Branched, under the rule of Indragni, the dual tutelar divinity Indra and Agni. This lunar station was figured as a decorated Gateway, and in later Hindu astronomy its borders were extended to include gamma (γ Zuben Elakrab) and iota (ι), thus completing the resemblance to the object for which the asterism was named; iota (ι) was the junction star with Anuradha.

Influences of 14th Hindu Moon Mansion Vicakha or Vishaka: Ruled by Jupiter. A soft and sharp asterism belonging to the lowest caste and producing mixed effects. Those born on the lunar day will be religious, dealers in produce, and fond of red flowers. With Moon here at birth native will be jealous, mean, miserly, good-looking, clever in speech, and quarrelsome. Rules cotton fields and the nipples. [Robson, p.81.]

History and Legend: Libra was not considered a separate constellation by the ancients and was called Chelae, or the Claws of Scorpius, which sign was made to consist of 60°. The present constellation figure is said to represent the balance wherein Astraea weighed the deeds of men and presented them to Jupiter. [Robson, p.49.]

The astrological influences of the star Zuben Elgenubi

According to Ptolemy and the old writers it is of the nature of Saturn and Mars, but later authors substitute Saturn and Venus or Saturn and Mercury, and Alvidas likens it to Mars, Venus and Saturn. It causes malevolence, obstruction, an unforgiving character, violence, disease, lying, crime, disgrace, and danger of poison. [Robson, p.205.]

It is well to remember here the association of this star with a scorpion’s claw, used for making love as well as for slaying its prey. It does not let go until one or other matter is complete and onlookers are not sure which of the two acts are in process. Sometimes even the Scorpion seems to get it wrong along the way! It frequently shows up ill-aspected in many unfortunate situations, from domestic strife and miscarriages of justice to psychopathic killings that started out in the guise of love. Its appearance in better aspect is often just the right moment to repair a relationship and to reconsider an earlier harsh judgment. Well aspected and on the ‘right planet’ we have someone of courage who will fight for right, but is generous to his opponents when they are defeated. If harshly aspected, especially to Mars, Saturn or the Moon, justice may well take a back seat to vengeance. [The Living Stars, Dr. Eric Morse, p.76-77.]

The unhelpful influence of this star is said to be noticeable especially in natives who were born during the night. A bad omen for health of the native is given if Sun or Moon is in conjunction with The Southern Scales. It has been noted that it is particularly disadvantageous to have Saturn or Neptune tied up with this star. Even the conjunction with Jupiter is credited as being adverse. Vehlow has recorded “confiscation of possessions during times of war’. A credit given to the Southern and Northern Scales is that they both bestow an immortal name. However, this comes about more by tragic circumstances than by well noted success. Conjunct the Ascendant, this star could mean rise in fortunes, followed by a downfall. There is also an indication of danger coming about in connection with water. [Fixed Stars and Their Interpretation, Elsbeth Ebertin, 1928, p.65.]

With Sun: Sickness, loss in business and through fire or speculation, disgrace, ruin, disfavor of superiors, suffers through wrongful accusations, sickness to family. [Robson, p.205.]

With Moon: Trouble through opposite sex, wrongful accusations, disgrace, ruin, mental anxiety, loss of relatives, many disappointments, much sickness, disease in those parts of the body ruled by the sign. [Robson, p.205.]

With Venus: Bad for marriage, sudden and secret death, may be poisoned owing to jealousy of one of own sex. [Robson, p.205.]