The history of the star: Zubenelschemali

from p.276 of Star Names, Richard Hinckley Allen, 1889.
[A scanned copy can be viewed on this webpage 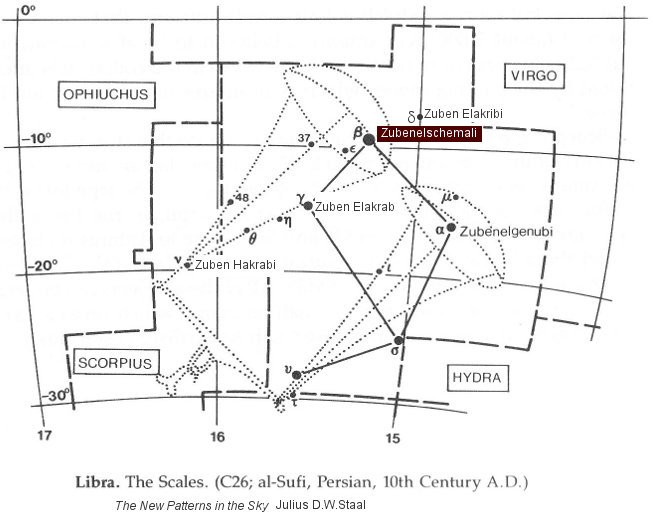 Zubeneschamali, sometimes Zuben el Chamali, is from Al Zuban al Shamaliyyah, the equivalent of Greek Chele Boreios, the Northern Claw; the early Greeks did not associate Libra’s stars with a “Balance” or “Scales”, to them it was the Chelae; the Claws of the Scorpion

Kiffa borealis is Arabic and Latin for the Northern Scale Tray; the 17th century German astronomer Bayer’s Lanx septentrionalis signifies the same thing; and Vazneschemali, the Southern Weight, was used by the Italian astronomer Riccioli (1598-1671). So that beta (β Zubenelschemali), as well as alpha (α Zuben Algenubi), seems always to have borne the name of that half of the constellation figure which it marked.

The German orientalist Epping says that it marked the 22nd ecliptic constellation of Babylonia, Nuru sha-Iltanu, the Northern Light; while German Orientalist Peter Jensen (1861-1936) assigns it and alpha (α Zuben Algenubi) to that country’s lunar asterism Zibanitu, connecting this word with the similar Arabic Zubana; but this is not generally accepted. Brown considers that, under the name of the Sugi Stars, they were associated with Bilat, the Lady, or Beltis; and that the Persians knew them as Crob, the Horned; the Sogdians, as Ghanwand, the Claw-possessing, equivalent to the Khorasmian (east of Persia) Ighnuna, and the Coptic people of Egypt Pritithi, the Two Claws,— all these being lunar stations.

{p.277} Professor Young states the opinion that beta (β Zubenelschemali) Libra formerly was brighter than Antares, now more than a full magnitude higher, for the Alexandrian-Greek astronomer Eratosthenes (276?-196 B.C.) distinctly called beta (β Zubenelschemali) “the brightest of all” in the combined Scorpion and Claws (the two constellations Scorpio and Libra); and the second-century Greek astronomer Ptolemy, 350 years later, gave to it and Antares the same brilliancy. Yet Antares may be the one that has increased.

The color is very unusual, perhaps unique, in conspicuous stars, for Webb says that in the heavens “deep green, like deep blue, is unknown to the naked eye.”

Robson (Fixed Stars and Constellations in Astrology) lists beta (β Libra), Zubenelschemali, as “Scale North” and said it is symbolically called “The Full Price” or “the price which covers”. The two scales of Libra were the Price of the Deficient (α, Zuben Algenubi) balanced by the Price which Covers (β, Zubenelschemali).

Alpha (α, α, Zuben Elgenubi), and this star beta (β Zubenelschemali), constituted the 14th manzil (Arabic Moon Mansion), Al Zubana, although the Persian astronomer Al Biruni (973-1048 A.D.) said that this title should be Zaban, “to push,” as though one of the stars were pushing away the other (!)

With Moon transiting here: buy cattle but do not navigate. [Robson, p.72.]

The astrological influences of the star Zubenelschemali

Notes: A pale emerald star situated in the northern scale of the Balance. Its proper name is Zubeneschamali, from Al Zuban al Shamaliyyah, the Northern Claw, a reference to the ancient celestial sphere in which Libra was omitted and Scorpio occupied 60°. It is symbolically called the Full Price. [Robson, p.203.]

Influences: According to Ptolemy it is of the nature of Jupiter and Mercury, but later writers have considered it similar to Jupiter and Mars, and Alvidas likens it to Mars in sextile to Jupiter. It gives good fortune, high ambition, beneficence, honor, riches, and permanent happiness. [Robson, p.203.]

Chaldeans believed that when this star was clear the crops would be good. [Fixed Stars and Judicial Astrology, George Noonan, 1990, p.34.]

The Northern Scales has a Jupiter-Mercury nature and therefore positive properties. Tied up with the MC and Ascendant or with well placed stellar bodies, the Northern Scales are credited with helping the native to gain honors and distinction. When connected with Mercury they are supposed to make the native studious. In good position, the star will arouse, above all things, spiritual and mental forces. The conjunction with Sun, Moon, or Jupiter favors civil servants, lawyers and scientists. Confiscation of possessions during times of war. Credited with bestowing an immortal name. [Fixed Stars and Their Interpretation, Elsbeth Ebertin, 1928, p.66.]