The history of the star: Zaurak

from p.218 of Star Names, Richard Hinckley Allen, 1889.
[A scanned copy can be viewed on this webpage 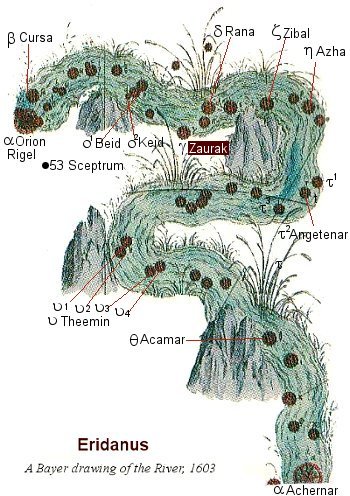 Gamma (γ)Eridanus, Zaurak, is a yellow star in the River.

Zaurac and Zaurak are from the Arabic Al Na’ir al Zaurak, the Bright Star of the Boat; but the German astronomer Ideler (1766-1846) applied this early designation to the star that now is alpha (α) of our Phoenix (Ankaa).

With delta (δ Rana), epsilon (ε), eta (η Azha), and others near, it made up the Chinese Tien Yuen, the Heavenly Park.

The astrological influences of the star Zaurak

Zaurak has a Saturnian character. Anyone who has this star connected with a planet in his chart should endeavor not to take life too seriously and put too much weight on everything people say. This person should struggle to overcome melancholy. Otherwise, this star could trigger off fear of death and suicidal tendencies. [Fixed Stars and Their Interpretation, Elsbeth Ebertin, 1928, p.23, under the name Zanrak.]