The history of the star: Achernar

from p.217 of Star Names, Richard Hinckley Allen, 1889.
[A scanned copy can be viewed on this webpage 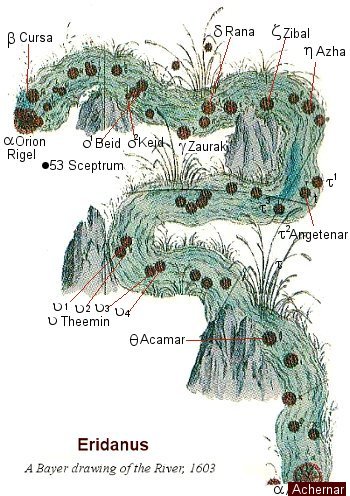 Alpha (α) Eridanus, Achernar, is a white star situated in the mouth of the River.

Achernar, is from Arabic Al Ahir al Nahr, “the End of the River”, nearly its present position in the constellation, about 32° from the south pole which is in the constellation Octans, but the {p.218} title was first given to the star now lettered theta (θ, Acamar), the farthest in the Stream known by Arabian astronomers.

This star is supposed to be one of Dante‘s Tre Facelle, notwithstanding its invisibility from Italy.

The second-century A.D. Greek astronomer Ptolemy did not mention it, although he could have seen it from the latitude of Alexandria, 31° 11′,— a fact, among others, which argues that his catalogue was not based upon original observations, but drawn from the now lost catalogue of Hipparchos (circa 190-120 B.C.), compiled at Rhodes, more than 5° further north, from which place Achernar was not visible.

Robson says this star is symbolized as the “Cherub and Sword”. [Robson, p.116.]

The astrological influences of the star Achernar

Well-placed, it promises happiness and success by giving good morals, faithful adherence to one’s religious beliefs or philosophical inclinations. According to tradition, Achernar is credited with bestowing high offices in the church, especially if conjunct with Jupiter. [Fixed Stars and Their Interpretation, Elsbeth Ebertin, 1928, p.80.]