The history of the star: Ankaa 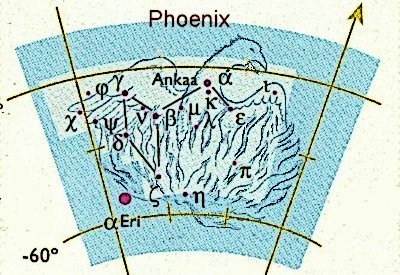 Alpha (α) Phoenix, Ankaa, is a star on the neck of the mythical Phoenix.

The Arabic spelling for Ankaa is Al-‘Anqa’ (), "The Phoenix". Also called Na’ir al Zaurak, the "Bright One in the Boat": Alpha, kappa, mu, beta, nu, and gamma Phoenix formed a line curving toward the south like that of a primitive Boat, by which figure, as Al Zaurak, the Arabs knew them. [The word "Phoenix" was said to come from "Phoenicia". The Phoenicians were a seafaring people. The boat would be an appropriate association].

Al Sufi cited another name, — Al Ri’al, "the Young Ostriches", — his terms in describing some stars of Al Nahr, the River (Eridanus), in which our Phoenix was then included by Arabian astronomers.

Legends of the Phoenix

In China, Egypt, India, and Persia — this bird, the Phoenix, has been "an astronomical symbol of cyclic period," some versions of the well-known fable making its life coincident with the Great Year of the ancients.

"A new Phoenix-period is said to have commenced A.D. 139, in the reign of Antoninus Pius; and a recrudescence of astronomical symbolism associated therewith is manifested on the coins of that Emperor." Coincidentally, Ptolemy adopted as the epoch of his catalogue the year 138, the first of Antoninus.

With the Egyptians who knew this bird as Bennu and showed it on their coins, it was an emblem of immortality; indeed it generally has been such in pagan as well as in Christian times.

A phoenix is: "A person or thing of unsurpassed excellence or beauty; a paragon" (American Heritage Dictionary) a supremely beautiful, rare, or unique person or thing" (Encarta). A successful completion of a process.

Associated words: Greek word phoinós for "red" (or "red blood") because the phoenix is associated with fire and the sun. The Greek word for purple is phoeno, the bird was said to be purple. Greek phonós is "murder". Phoenix is a "date-palm" where it is said to have built its nest. Porphyry (a crystal rock from a Latin word for purple).

The word Phoenician is thought to be related to the word purple: from M.Fr. phenicien, from L. Phoenice, from Gk. Phoinike, perhaps lit. "land of the purple" (source of purple dye). Identical with phoenix (q.v.), but the relationship is obscure.

Fires: The phoenix in mythology is said to live for 500 or 1000 years. At the end of its life, it builds and settles on a nest or funeral pyre of spices, and when the sun reaches its apex, the heat of its rays ignites the nest and the phoenix perishes in the flames. Another story says it lights the fire by striking a rock with its beak and fans the flames with its wings. Three days later from its own ashes a little worm crawls forth which became the new phoenix.

The "fawkes" in Guy Fawkes is said to be related to "phoenix", and it is said that the naming of Fawkes arises from the phoenix’s tendency to burst into flame []. About 400 years ago, Guy Fawkes attempted to blow up the English Houses of Parliament with gunpowder. Every year on the anniversary of the Gunpowder Plot, children burn an effigy of him on a bonfire. This includes the letting off fireworks. Arsonists (in the AstroDataBank program) often have a connection with this star, Ankaa

The astrological influences of the constellation Phoenix

It is said to give a pioneering disposition, ambition and power, together with a long life and lasting fame. [Robson, p.57.]

This star has been activated at the invention of Braille (new ways to "see", new light), the invention of the electric incandescent lamp (light). The "Early Bird" satellite used to transmit television pictures across the Atlantic, new Eras (opening up of Japan), new governments.