The history of the star: Wasat

from p.234 of Star Names, Richard Hinckley Allen, 1889.
[A scanned copy can be viewed on this webpage 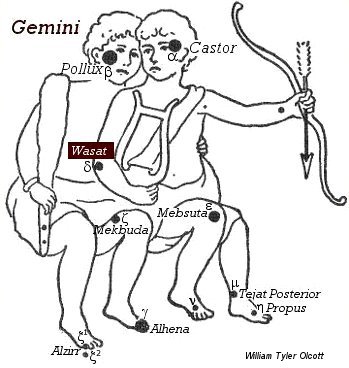 Delta (δ) Gemini, Wasat, is a double star, pale white and purple, on the right arm of the Northern Twin (Castor), or some give it as on the waist area of the Southern Twin, Pollux; hence the meaning of the name Al Wasat “the Middle”.

Wasat and Wesat are from Al Wasat, the Middle, i.e. of the constellation; but some have referred this to the position of the star very near to the ecliptic, the central circle.

In China it was Ta Tsun, the Great Wine-jar.

Just north of delta (δ Wasat) lies the radiant point of the Geminids, visible early in October; another stream of meteors bearing the same title appearing from the northeastern border of the constellation and at its maximum on the 7th of December.

The planet Pluto was discovered in the constellation Gemini on Feb 18th 1930 close to this star by Clyde Tombaugh.

The astrological influences of the star Wasat

Of the nature of Saturn. Connected with chemicals, poisons and gas. Violence, malevolence, destructiveness as a first principal. [Robson, p.216.]

Because of the Saturnine quality of this star, it gives a heaviness and tendency to pessimism. Apart from that however, Al Wasat does show up a quality of being able to speak with clear authority when others are waffling and prominence in public affairs or management is often the result. [The Living Stars, Dr. Eric Morse, p.45.].