The history of the star: Talitha 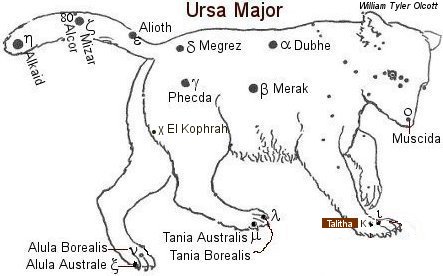 Iota (ι) Ursa Major, Talitha, is a binary, 3.2 and 13, topaz yellow and purple star on the front paw of the Greater Bear.

“this star has obtained the name of Talita, the third vertebra, the meaning of which is not quite clear. Ulug Beigh has it Al Phikra al Thalitha, perhaps for AI Kafzah althalithah, the third spring, or leap, of the ghazal;”

but he was not sufficiently comprehensive, for this last title was applied by the Arabs to iota (ι  Talitha,) and kappa (κ El Kophrah) together.

In popular lists this star iota (ι) frequently is given as Talitha. The 17th century English orientalist Thomas Hyde strangely rendered the original words of the 15th century Tartar astronomer Ulug Beg as the Vertebrae of the Greater Bear,— whence probably the English astronomer Smyth (1788-1865)’s statement,— or the Cavity of the Heel, which, from the star’s position in the figure, is a much more likely translation.

In China these two stars were Shang Tae, the High Dignitary.

“Talitha” means “Daughter of the assembly”. A star in the right front leg of the Greater Bear. Therein lies an amazing story of the origin of the Bible. In Mark 5:22&23, Jairus one of the rulers of the synagogue (assembly), comes to Jesus and said “my little daughter is at the point of death”. So here we have the “daughter of the assembly”. Jesus goes to the house of the daughter and in Mark 5:41 he takes her hand and says “Talitha Cumi” which means “daughter arise”. So what’s being said? The star in the right rear leg of Ursa and the star in the front leg of Ursa is used as the basis of this story of healing and compassion. It is written in the stars and one must consider, is the power in the stars as well?” http://www.hiddenmeanings.com/hidden.html

The Leaps of the Gazelle: In ancient Arabia, before the Arabs adopted the Greek Astronomical figures for the constellations, they had different configurations in the sky. Many of starnames comes to us from this tradition.

They were collectively designated Kafzah al Thiba’, the Springs of the Gazelle. The Gazelle being imagined from the unformed stars since gathered up as Leo Minor, and the springing from the Pond (Coma Berenice) of the animal being due to its fear of the greater Lion’s tail. [In early Arabia Coma Berenice was Al Haud, the Pond, into which the Gazelle, our Leo Minor, sprang when frightened at the lashing of the Lion’s tail (Coma Berenice is the tuft of the Lion’s tail in the Arabian figure of Leo); although some of the Arabic observers claimed that this Pond lay among the stars of the neck, breast, and knees of the Greater Bear Ursa Major: and Lach substituted it for the Gazelle in our location of Leo Minor. Ideler adopted this from Al Tizini and the Cufic globe at Dresden; while the Borgian globe shows a Gazelle and her Young in the same location. Kazwini, however, described this group as extending over the eyes, eyebrows, ears, and muzzle of the figure of our Ursa Major.]