The history of the star: Tania australis 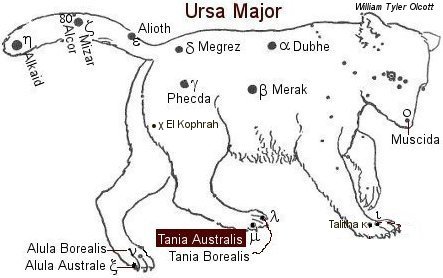 Mu (μ) Ursa Major, Tania Australis, is a red star in the right hind paw of the Greater Bear.

Tania Australis, is from Arabic Ath-Thaniyah (), The southern one of “the second” leap.

These are our Tania borealis and Tania Australis; and together were the Arabs’ Al Kafzah al Thaniyab, “the Second Spring” of the Gazelle, marking the Bear’s left hind foot.

Also called Al Phikra al Thania, — in the original Al Fikrah, “the Vertebra” but this, more probably, is entirely wrong, as these three pairs of stars have always marked three of the Bear’s feet.

The Leaps of the Gazelle: In ancient Arabia, before the Arabs adopted the Greek Astronomical figures for the constellations, they had different configurations in the sky. Many of starnames comes to us from this tradition.

Nu (Alula Borealis) and xi (Alula Australe) marked the right hind foot of the Greater Bear were “the First Leap” of the Gazelle. Lambda (Tania Borealis) and mu (this star: Tania Australis) together, marking the Bear’s left hind foot, were “the Second Leap” of the Gaselle. Iota (Talitha) and kappa marking the Third Leap. Each pair marking one “spring”.

They were collectively designated Kafzah al Thiba’, the Springs of the Gazelle. The Gazelle being imagined from the unformed stars since gathered up as Leo Minor, and the springing from the Pond (Coma Berenice) of the animal being due to its fear of the greater Lion’s tail. [In early Arabia Coma Berenice was Al Haud, the Pond, into which the Gazelle, our Leo Minor, sprang when frightened at the lashing of the Lion’s tail (Coma Berenice is the tuft of the Lion’s tail in the Arabian figure of Leo); although some of the Arabic observers claimed that this Pond lay among the stars of the neck, breast, and knees of the Greater Bear Ursa Major: and Lach substituted it for the Gazelle in our location of Leo Minor. Ideler adopted this from Al Tizini and the Cufic globe at Dresden; while the Borgian globe shows a Gazelle and her Young in the same location. Kazwini, however, described this group as extending over the eyes, eyebrows, ears, and muzzle of the figure of our Ursa Major.]