The history of the star: El Kophrah 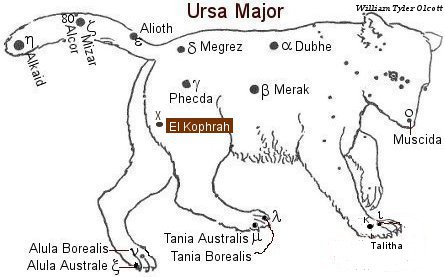 Chi (χ) Ursa Major, El Kophrah, is a red star on the hind quarters of the Greater Bear.

Chi (χ) is placed on the right foot by Burritt’s Atlas of 1856 as Al Kaphrah, is wrong, for Heis puts the letter at a star on the rear of the right hind quarter, and has no letter at Burritt’s Geography of 1856’s star; if entitled to a name at all, it should be Al Kafzah, as at iota (ι Talitha) and kappa (κ). Still the Standard Dictionary follows Burritt’s Atlas of 1856 in its El Kophrah

It was the Chinese Tae Yang Show, the Sun Governor, and Shaou We, of somewhat similar signification.

Influences: According to Ptolemy, Ursa Major is like Mars. It is said to give a quiet, prudent, suspicious, mistrustful, self-controlled, patient nature, but an uneasy spirit and great anger and revengefulness when roused. By the Kabalists it is associated with the Hebrew letter Zain and the 7th Tarot Trump "The Chariot." [Robson, p.65.]

"Now when, after completing a revolution round the pole, the Bear (Ursa Major) with muzzle foremost replaces her unceasing steps in her former tracks, never immersed in Ocean but ever turning in a circle, to those born at such a time wild creatures will show no hostile face, and in their dealings with animals these men will find them submissive to their rule. Such a one will be able to control huge lions with a gesture, to fondle wolves, and to play with captive panthers; so far from shunning the powerful bears that are the kin of the constellation, he will train them to human accomplishments and feats foreign to their nature; he will seat himself on the elephant’s back and with a goad will direct the movements of a beast which disgraces its massive weight by yielding to tiny jabs; he will dispel the fury of the tiger, training it to become a peaceful animal, whilst all the other beasts which molest the earth with their savageness he will join in friendship to himself; keen-scented whelps he will train…" [here the translator notes that eight pages have been lost] [Astronomica, Manilius, 1st century AD, book 5, p.357, 359]

"Now where heaven reaches its culmination in the shining Bears, which from the summit of the sky look down on all the stars and know no setting and, shifting their opposed stations about the same high point, set sky and stars in rotation, from there an insubstantial axis runs down through the wintry air and controls the universe, keeping it pivoted at opposite poles: it forms the middle about which the starry sphere revolves and wheels its heavenly flight, but is itself without motion and, drawn straight through the empty spaces of the great sky to the two Bears and through the very globe of the Earth, stands fixed, since the entire atmosphere ever revolves in a circle, and every part of the whole rotates to the place from which it once began, that which is in the middle, about which all moves, so insubstantial that it cannot turn round upon itself or even submit to motion or spin in circular fashion, this men have called the axis, since, motionless itself, it yet sees everything spinning about it. The top of the axis is occupied by constellations well known to hapless mariners, guiding them over the measureless deep in their search for gain. Helice (Ursa Major), the greater, describes the greater arc; it is marked by seven stars which vie with each other under its guidance the ships of Greece set sail to cross the seas. Cynosura [Ursa Minor] is small and wheels round in a narrow circle, less in brightness as it is in size, but in the judgment of the Tyrians it excels the larger bear. Carthaginians count it the surer-guide when at sea they make for unseen shores. They are not set face to face: each with its muzzle points at the other’s tail and follows one that follows it. Sprawling between them and embracing each the Dragon separates and surrounds them with its glowing stars lest they ever meet or leave their stations." [Astronomica, Manilius, 1st century AD, book 1, p.27, 29].