The history of the star: Tabit

from p.320 of Star Names, Richard Hinckley Allen, 1889.
[A scanned copy can be viewed on this webpage 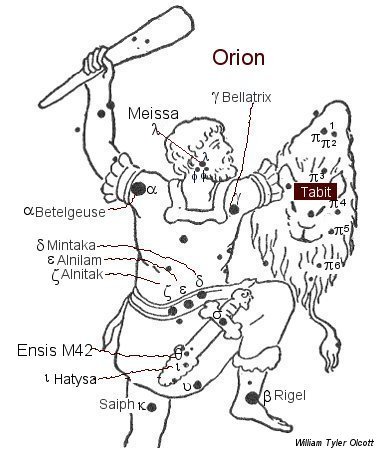 Pi (π) Orion, Tabit, is the northern star in the Hunter, one of a number of pi stars on the skin that is held in his left hand that he is showing off as a trophy.

The other stars are unnamed; omicron, omicron, pi, pi, pi, pi and ; these stars are in a vertical line at the right of the figure of Orion, and indicate the lion’s skin.

Tabit might be from the Arabic Al Thabit “Endurer” [this is also a title for upsilon Orion, a much smaller star that lies on the lower edge of his tunic].

With Pliny these stars in the lion’s skin are supposed to have been a separate constellation known as the Shield, made from the bull’s hide of the Hyriean legend. [The Hyriean legend relates to the story of Zeus, Hermes and Poseidon who were entertained royally by Hyrieus. In gratitude for his hospitality, these gods promised to grant Hyrieus whatever he requested. Hyrieus asked for a son. The three gods then took the hide of a cow or bull, urinated in it (the word Orion is related to “urine” in Greek), and buried it. Nine months later Orion emerged from the ground.]

The stars in the Skin were the Persians’ Al Taj, “the Crown”, or “Tiara”, of their kings; and the Arabians’ Al Kumm, “the Sleeve” of the garment in which they dressed the Giant, the skin being omitted.

Al Sufi’s title was Manica “a sleeve” in heraldry, from a Latin term for a protecting Gauntlet; Mantile and it was figured as a cloth thrown over the Giant’s arm.

Arabic Al Dhawaib, “Anything Pendent” was another name.