The history of the star: Skat

from p.53 of Star Names, Richard Hinckley Allen, 1889.
[A scanned copy can be viewed on this webpage 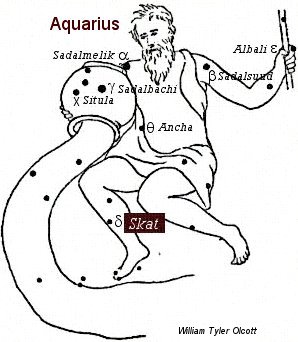 Delta (δ) Aquarius, Skat, is a star on the Shin-bone of the Water Pourer.

16th and 17th century astronomers transcribing from Arabic called it Scheat, and Scheat Edeleu, the word variously derived: either from Al Shi’at, a Wish, said to be found for it on Arabic globes; or from AlSak, the Shin-bone, near which it is located in the figure (of the Water Pourer), but some said the name comes from AlSa’d of the preceding stars.

On the Euphrates it seems to have been associated with Hasisadra or Xasisadra, the 10th antediluvian king and hero of the Deluge; while, with beta (β) Sadalsuud, kappa (κ) Situla, and others adjacent, it was the lunar station Apin, the Channel, and individually the Star of the Foundation. The corresponding stations, Khatsar in Persia, Shawshat in Sogdiana (an Iranian people), and Mashtawand in Khorasmia, were also determined by this star.

The Chinese knew it, with tau (τ), chi (χ), the three stars psi (ψ), and some in Pisces, as Yu lin Keun, the Imperial Guard.

From near this star delta (δ Skat) issues a meteor stream, the delta Aquarids, [July 14 to August 18], and not far away Mayer noted as a fixed star, on the 25th of September, 1756, the object that nearly twenty-five years later Sir William Herschel observed as a comet, but afterwards ascertained to be a new planet, our Uranus.

The astrological influences of the star Skat

According to Ptolemy it is of the nature of Saturn and Jupiter; to Simmonite, of Uranus; and, to Alvidas, of Uranus and Venus in sextile to Mercury. It gives good fortune and lasting happiness. [Robson, p.210.]

The star Skat gives good fortune and lasting happiness and also it is said to indicate safety in a deluge. [Fixed Stars and Judicial Astrology, George Noonan, 1990, p.40.]

With Sun: Sensitive, emotional, psychic, criticism and persecution through mediumship, but help from friends. [Robson, p.210.]

With Saturn: Trouble through opposite sex, many travels and peculiar adventures, sudden up and downs, early marriage but may desert wife may be deserted or marriage may be bigamous, separated from children, no help from friends, bad for health in latter part of life, may die in workhouse, hospital or asylum. [Robson, p.210.]

With Neptune: Abnormal mind, changeable, easily discouraged, idealistic, psychic, many alliances, separated from marriage partner and children, accidents, may become insane, death through a fall or by water in middle life. [Robson, p.211.]