The history of the star: Situla

from p.54 of Star Names, Richard Hinckley Allen, 1889.
[A scanned copy can be viewed on this webpage 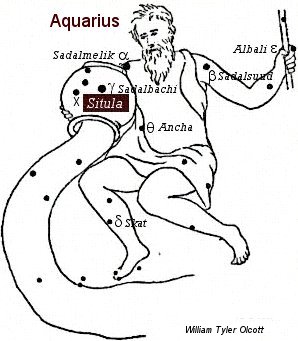 Chi (χ) Aquarius, Situla, is a western star on the bucket of Aquarius.

Situla is applied to this star from the classical Latin term for a Water-jar or bucket, the later Arabian word being the somewhat similar Satl, and the earlier Al Dalw

Gassendi, however, derived it from sitis, thirst, the Waterman’s Urn having been figured by some as an Oven!

Theon the Younger, father of the celebrated Hypatia of our 5th century, termed this star (Greek) Oinochoeia, the Outpouring of Wine, as if by Ganymede; and others, Greek Kalpe, and Urna, the southern edge of which, near the outflow, it marks.

Influences: Ptolemy makes the following observations: "The stars in the shoulders of Aquarius operate like Saturn and Mercury; those in the left hand and in the face do the same: those in the thighs have an influence more consonant with that of Mercury, and in a less degree with that of Saturn: those in the stream of water have power similar to that of Saturn, and moderately to that of Jupiter." By the Kabalists Aquarius is associated with the Hebrew letter Nun and the 14th Tarot Trump "Temperance," over which virtue the constellation appears to have some rule. The beauty of Ganymedes and his flight through the air also link it to the ideas of personal charm and aviation with which it is certainly connected. [Robson, p.28-29.]

"The youthful Waterman, who from upturned pot pours forth his stream, likewise bestows skills which have affinity with himself: how to divine springs under the ground and conduct them above, to transform the flow of water so as to spray the very stars, to mock the sea with man-made shores at the bidding of luxury, to construct different types of artificial lakes and rivers," and to support aloft for domestic use streams that come from afar. Beneath this sign there dwell a thousand crafts regulated by water. Why, water will even set in motion the face of heaven and the starry habitations, and will cause the skies to move in a novel rotation. Never will the sons of Aquarius grow tired of the works which come in the wake of water and follow springs. They who issue from this sign are a gentle sort and a lovable breed, and no meanness of heart is theirs: they are prone to suffer losses: and of riches they have neither need nor surfeit. Even thus doth the urn’s stream flow" [Astronomica, Manilius, 1st century AD, book 4, p.243.]