The history of the star: Sadalsuud

from p.52 of Star Names, Richard Hinckley Allen, 1889.
[A scanned copy can be viewed on this webpage 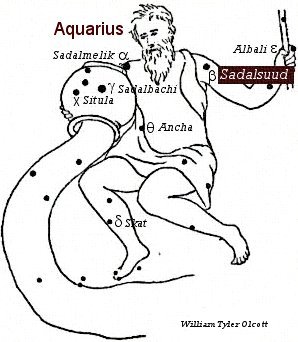 Beta (β) Aquarius, Sadalsuud, is a pale yellow 3rd magnitude star in the left shoulder of the Water Carrier.

Sadalsuud — not Sund nor Saud, as frequently written — is from Al Sad al Suud, liberally translated the Luckiest of the Lucky, from its rising with the sun when the winter had passed and the season of gentle, continuous rain had begun. This title also belongs to the 22d manzil (Arabic Moon Mansion), which included the star with xi (ξ) of Aquarius and of Capricornus.

Beta (β Sadalsuud) and xi (ξ) also constituted the Persian lunar station Bunda and the similar Coptic people of Egypt Upuineuti, the Foundation; but beta (β Sadalsuud) alone marked the sieu (Chinese Moon Mansion) Heu, Hiu, or Hu, Void, anciently Ko, the central one of the seven sieu (Chinese Moon Mansion) which, taken together, were known as Heung Wu, the Black Warrior, in the northern quarter of the sky. It is found in Hindu lists as Kalpeny, of unknown signification. On the Euphrates it was KakkabNammaχ, the Star of Mighty Destiny, that may have given origin to the title of the manzil (Arabic Moon Mansion), as well as to the astrologers’ name for it — Fortuna Fortunarum

On the Euphrates this star Sadalsuud (with xi Aquarius) was KakkabNammaχ, "the Star of Mighty Destiny", that may have given origin to the title of the 22d manzil (Arabic Moon Mansion) Al Sa’d al Su’ud, The Luckiest of the Lucky, as well as to the astrologers’ name for it — Fortuna Fortunarum

Influences: Ptolemy makes the following observations: "The stars in the shoulders of Aquarius operate like Saturn and Mercury; those in the left hand and in the face do the same: those in the thighs have an influence more consonant with that of Mercury, and in a less degree with that of Saturn: those in the stream of water have power similar to that of Saturn, and moderately to that of Jupiter." By the Kabalists Aquarius is associated with the Hebrew letter Nun and the 14th Tarot Trump "Temperance," over which virtue the constellation appears to have some rule. The beauty of Ganymedes and his flight through the air also link it to the ideas of personal charm and aviation with which it is certainly connected. [Robson, p.28-29.]

"The youthful Waterman, who from upturned pot pours forth his stream, likewise bestows skills which have affinity with himself: how to divine springs under the ground and conduct them above, to transform the flow of water so as to spray the very stars, to mock the sea with man-made shores at the bidding of luxury, to construct different types of artificial lakes and rivers," and to support aloft for domestic use streams that come from afar. Beneath this sign there dwell a thousand crafts regulated by water. Why, water will even set in motion the face of heaven and the starry habitations, and will cause the skies to move in a novel rotation. Never will the sons of Aquarius grow tired of the works which come in the wake of water and follow springs. They who issue from this sign are a gentle sort and a lovable breed, and no meanness of heart is theirs: they are prone to suffer losses: and of riches they have neither need nor surfeit. Even thus doth the urn’s stream flow" [Astronomica, Manilius, 1st century AD, book 4, p.243.]

The astrological influences of the star Sadalsuud

According to Ptolemy it is of the nature of Saturn and Mercury; to Simmonite, of Uranus; and, to Alvidas, of Uranus in sextile to the Sun. It is said to cause trouble and disgrace. [Robson, p.202.]

With Mercury: Social success, favors from opposite sex but some transitory difficulties, retirement owing to abuse of position, sudden loss through speculation, domestic sorrow and trouble. [Robson, p.202.]

With Jupiter: Litigation, material and social success, difficulties in marriage, may marry abroad or a foreigner. [Robson, p.202.]