The history of the star: Seginus

from p.103 of Star Names, Richard Hinckley Allen, 1889.
[A scanned copy can be viewed on this webpage 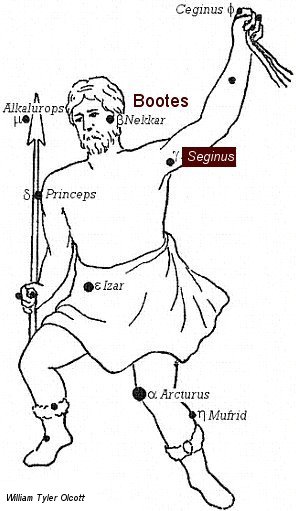 Gamma (γ) Bootes, Seginus, is a star situated on the left shoulder of the Ploughman.

Manilius (1st century A.D.) termed it prona Lycaonia, “sloping towards, or in front of, Lycaon,” referring to the Greater Bear, as the star marks the left shoulder of Bootes near to that constellation (Ursa Major) [the title Lycaonia for the constellation Ursa Major is because that constellation is identified with Callisto the daughter of Lycaon; Bootes constellation had a title Lycaon, the father or grandfather of Callisto]; and Euripides similarly wrote in his Ion of about 420 B.C.:

“Above, Arcturus to the golden pole inclines.”

The French astronomer Flammarion gives to it the Alkalurops that is better recognized for mu (μ) Bootes. The Chinese called it Heuen Ko, the Heavenly Spear.

It is interesting to know that the variable nu (ν) is in the telescopic field with gamma (γ Seginus).

This star, gamma (γ Seginus), with beta (β Nekkar), delta (δ Princeps), and mu (μ Alkalurops), constituted the trapezium Al Dhi’bah, the Female Wolves, or, perhaps, Hyaenas, an early asterism of the Arabs before they adopted the Greek constellation; these animals, with others similar shown by stars in Draco and near it, lying in wait for the occupants of the ancient Fold around the pole (Polaris).

Legend: Bootes is identified with Icarius, who was killed by some shepherds he had made drunk with a flagon of wine given him by Bacchus/Dionysus. In consideration of the grief of his daughter Erigone and their hound Maera, Jupiter placed her father in heaven as Bootes, together with herself as Virgo and the hound became one of the Dogs; some say Canis Minor, others say Canis Major

Influences: According to Ptolemy the influence of the constellation is like that of Mercury and Saturn, though the star Arcturus is like Mars and Jupiter. It is said to give prosperity from work, strong desires, a tendency to excess, a fondness for rural pursuits, together with some liking for occultism. The Kabalists associate it with the Hebrew letter Teth and the 9th Tarot Trump, “The Hermit”. [Robson, p.32.]

The astrological influences of the star Seginus

It gives a subtle mind, shamelessness and loss through friends and companies. [Robson, p.207.]

On the left shoulder of Bootes has the star gamma, γ, Seginus, a word coming from Latin for corn-crop, and thus meaning a reaper or harvester. In some illustrations Bootes hold a reaping sickle in his hand. To the Arabs it is Al Haris, the Guard or Protector. With its Mercury-Saturn simile it emphasizes the protective nature of Bootes, and ourselves. The planetary connotation also shows  up well the potential for writing or public speaking in those who have it in their horoscopes. [The Living Stars, Dr. Eric Morse, p.142.]

With Moon: Preferment by indirect means followed by disgrace and ruin. [Robson, p.207.]