The history of the star: Alkalurops

from p.105 of Star Names, Richard Hinckley Allen, 1889.
[A scanned copy can be viewed on this webpage 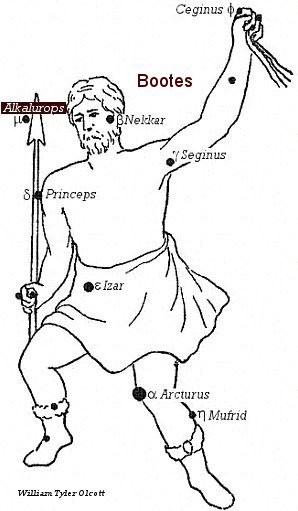 Mu (μ) Bootes, Alkalurops, is a ternary star, 4.2, 8, and 8.5, flushed white, the last two greenish white, the small companion mu being a close double, in the Herdsman’s staff or crook.

Alkalurops was the Arabian adaptation of Kalaurops, used by Hesychios (5th century. AD.) for the Herdsman’s Club, Crook, or Staff, analogous to the Ropalon of Hyginus and the Clava of the Latins.

Inkalunis appears in some of the Alfonsine Tables; Icalurus in those of 1521, and Incalurus in the 1515 Almagest, all long supposed to be bungled renderings of the second-century Greek astronomer Ptolemy’s Kollorobos, itself probably a word of his own coining to designate the position of the star in the club; the Italian astronomer Riccioli (1598–1671) writing it Colorrhobus. But Ideler, rejecting this, thought the 17th century German astronomer and ephemeris creator Schickard more correct in deriving these words from en kolouro, “in the colure,” a statement that was nearly right as to Arcturus 2000 years ago; the name since then having, in some way, been transferred to this star, as also to the constellation (Bootes). Some Latin writers have called this star Venabulum, a Hunting-spear.

This star, mu (μ Alkalurops), with beta (β Nekkar), with gamma (γ Seginus), delta (δ Princeps), constituted the trapezium Al Dhi’bah, the Female Wolves, or, perhaps, Hyaenas, an early asterism of the Arabs before they adopted the Greek constellation; these animals, with others similar shown by stars in Draco and near it, lying in wait for the occupants of the ancient Fold around the pole (Polaris)..

Legend: Bootes is identified with Icarius, who was killed by some shepherds he had made drunk with a flagon of wine given him by Bacchus/Dionysus. In consideration of the grief of his daughter Erigone and their hound Maera, Jupiter placed her father in heaven as Bootes, together with herself as Virgo and the hound became one of the Dogs; some say Canis Minor, others say Canis Major