The history of the star: Nekkar

from p.103 of Star Names, Richard Hinckley Allen, 1889.
[A scanned copy can be viewed on this webpage 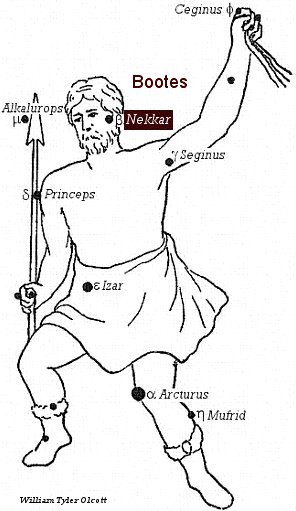 Beta (β) Bootes, Nekkar, is a golden yellow star near the left ear of the Herdsman.

Nakkar and Nekkar are from the Arabic name for the whole constellation of Bootes.

The Chinese knew it as Chaou Yaou, or Teaou, words meaning “to beckon, excite, or move.”

This star, beta (β Nekkar), with gamma (γ Seginus), delta (δ Princeps), and mu (μ Alkalurops), constituted the trapezium Al Dhi’bah, the Female Wolves, or, perhaps, Hyaenas, an early asterism of the Arabs before they adopted the Greek constellation; these animals, with others similar shown by stars in Draco and near it, lying in wait for the occupants of the ancient Fold around the pole (Polaris).

“True is the name men have given him (the Bear-warden), threatening-like he presses forward as one does over a team of bullocks. To those born under Arctophylax – Arcturus, fortune herself makes bold to entrust her treasures, so that the wealth of monarchs and temple finances will be in their keeping [custodianship is a suitable endowment for the Bear-ward]; they will be kings under kings and ministers of state [politicians], and be charged with the guardianship of the people or, as the stewards of grand houses, they will confine their business to the care of another’s home.” [Translator’s note: strictly speaking Arcturus is a star, but the name is used by ancient astrologers for the whole constellation of Bootes and for the star alone, it is often difficult to distinguish which of these the authors are referring to]. [Manilius, Astronomica, 1st century AD, book 5, p.329.]