The history of the star: Sadalmelik

from p.51 of Star Names, Richard Hinckley Allen, 1889.
[A scanned copy can be viewed on this webpage 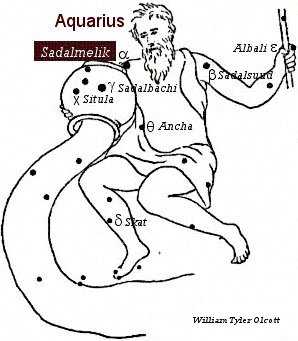 Alpha (α) Aquarius, Sadalmelik, is a third magnitude pale yellow star on the right shoulder of the Water-pourer, 1° south of the celestial equator.

Sadalmelik is from the Arabic Al Sa’d al Malik, the Lucky One of the King, sometimes given as Al Sa’d al Mulk, the Lucky One of the Kingdom, under which last title the 13th century Persian astronomical writer Al Kazwini and the 15th century Tartar astronomer Ulug Beg combined it with omicron (ο). It similarly was Sidus Faustum Regis with the astrologers. Burritt’s Atlas of 1856 called it El Melik and Phard, but this last seems unintelligible.

With epsilon (ε, Enif) and theta Pegasus (θ Biham) it made up the 23d sieu (Chinese Moon Mansion) Goei, or Wei, Steep, or Danger, anciently Gui; but Brown says that the word signifies Foundation, alpha (α Sadalmelik) was the determinant star of this lunar station.

With Moon transiting here: unfortunate for everything except taking medicine.

The astrological influences of the star Sadalmelik

According to Ptolemy it is of the nature of Saturn and Mercury; to Simmonite, of Saturn and Jupiter; and to Alvidas of Jupiter and Uranus in sextile to the Sun from Pisces and Taurus. It causes persecution, lawsuits, extreme and sudden destruction and the death penalty. [Robson, p.200.]

With Moon: Prominence in occult matters, success in large companies, favorable for gain. If at the same time a malefic be with Algol, death by royal command either by hanging or by decapitation. [Robson, p.201.]

With Mars: Fame through discoveries in science or inventions, benefits do not last. [Robson, p.201.]

With Neptune: Psychic, prominence in occult matters, kind, sympathetic, generous, friends among clergy and lawyers, favorable for gain through companies, banks or stocks, domestic harmony but sickness to wife or children entailing the breaking up of home, minor accidents, long life. [Robson, p.201.]