The history of the star: Sadalachbia

from p.52 of Star Names, Richard Hinckley Allen, 1889.
[A scanned copy can be viewed on this webpage 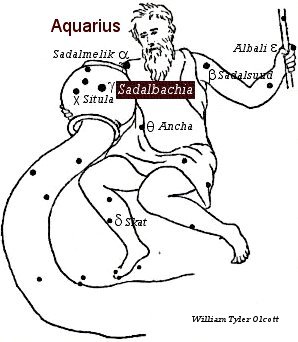 Gamma (γ) Aquarius, Sadalachbia, is a 4th magnitude greenish star in the right arm of the Water Bearer, and the westernmost star, at the inner edge of the Urn (on the Urn in this Olcott drawing).

Sadachbia, from Al Sad alAhbiyah (now called Sadalachbia) which has been interpreted the Lucky Star of Hidden Things or Hiding-places, because when it emerged from the sun’s rays all hidden worms and reptiles, buried during the preceding cold, creep out of their holes! But as this word Ah’biyah is merely the plural of H’iba‘, a Tent, a more reasonable explanation is that the star was so called from its rising in the spring twilight, when, after the winter’s want and suffering, the nomads’ tents were raised on the freshening pastures, and the pleasant weather set in. This idea renders the 19th American philologist Professor Whitney’s “Felicity of Tents” a happy translation of the original.

Zeta (ζ), eta (η), and pi (π) are included with gamma (γ) Sadalachbia, under this designation by the 15th century Tartar astronomer Ulug Beg —zeta (ζ), in the centre, marking the top of the tent; the 13th century Persian astronomical writer Al Kazwini, however, considered this central star as Al Sa, and the three surrounding ones his tents.

With Moon transiting here: unfortunate for everything except taking medicine. [This is “The Lucky Star of Hidden Things or Hiding Places”; it should be good for finding things; see what Eric Morse says below] [Robson P.74.]

The astrological influences of the star Sadalachbia

“The Lucky Star of Hidden Things”. In horary it indicates the ability to discover that which is hidden or lost ‘The Lucky One for Hidden Things, or for Tent dwellers’; Abhbiyah is the plural of a word once common for a tent but also meaning a place of seclusion. It is said that, when the Sun rises conjunct this star, about 25th February, then all the worms and insects come out of their winter holes and tent dwellers can move to their Spring pasture-lands. That is the warmer climes of Arabia, of course, not London or New York. The meaning we find in this star is, as an indicator of the right time for making moves, entering upon new ventures, a likelihood of general success in enterprises if Sadachbia be well placed and aspected on the horoscope. [The Living Stars, Dr. Eric Morse, p.111.]