The history of the star: Biham 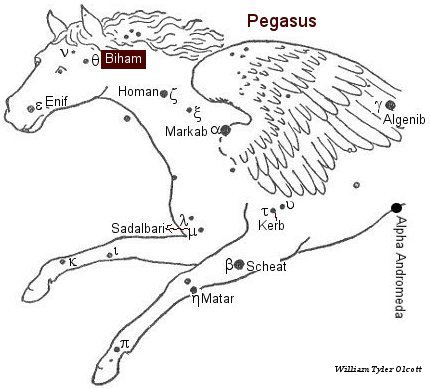 Theta (θ) Pegasus, Biham, and nu (ν), are stars in the head of the Flying Horse.

They were the 10th century Persian astronomical writer Al Sufi’s Sa’d al Bahaim, the Good Luck of the Two Beasts; Al Achsasi adding to the group the still brighter zeta (ζ Homan). Theta (θ Biham) alone is Baham in some modern lists; but the 15th century Tartar astronomer Ulug Beg had Biham, the Young of domestic animals. It appears on the Dresden globe as Al Hawa’im, the Thirsty Camels.