The history of the star: Mirach

from p.36 of Star Names, Richard Hinckley Allen, 1889.
[A scanned copy can be viewed on this webpage 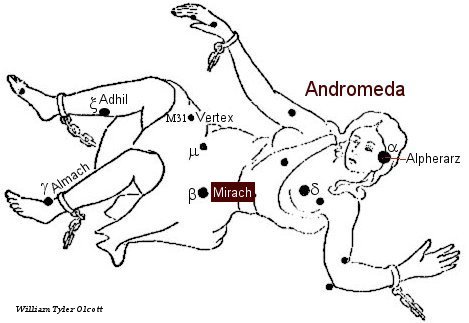 Beta (β) Andromeda, Mirach, is a yellow star “in the Girdle of the Chained Woman”, Allen says it is now on the left hip.

Mirach was described in the AlfonsineTables of 1521 as supermirat, from which has been derived its present title, as well as the occasional forms Mirac, Merach, Mirar, Mirath, Mirax, etc.; mirat probably coming from the 1515 Almagest’ssupermizar, the Arabic mi’zar, a girdle or waist-cloth. Mizar as a 16th century title, a title also used for beta (β) Ursa Major (Merak).

Some have termed it Cingulum (Latin for girdle or belt); others, Ventrale (Latin for belly), from its former position in the figure (of Andromeda), although now it is on the left hip.

In later Arabian astronomy it marked the right side of Andromeda, and so was known as Al Janb al Musalsalah, “the Side of the Chained Woman”.

This star, beta (β) Mirach, appeared in very early Arabic drawings as the lucida (brightest star in the constellation) of the northern of the two Fishes of Pisces, and marked the Arabic 26th manzilAl Batn al Hut, “the Belly of the Fish”, or Al Kalb al Hut, “the Heart of the Fish”. In this location it was Al Risha, the Band, Cord, Ribbon, or Thread, as being on the line uniting the Fishes; but this title now belongs to alpha Piscium (Al Risha).

It marked the corresponding sieu (Chinese Moon Mansion) Goei, or Kwei, the Man Striding, or the Striding Legs, anciently Kwet

Along with upsilon, phi, and chi Pisces, it was the Egyptian Coptic lunar station Kuton, the “Thread” another name was Arit, an asterism indigenous to Egypt.

In astrology was a fortunate star, portending renown and good luck in matrimony.

This star, beta (β) Mirach, appeared in very early Arabic drawings as the lucida (brightest star in the constellation) of the northern of the two Fishes of Pisces, and marked the Arabic 26th manzil (Arabic Moon Mansion) Al Batn al Hut, “the Belly of the Fish”, or Al Kalb al Hut, “the Heart of the Fish”. In this location it was Al Risha, the Band, Cord, Ribbon, or Thread, as being on the line uniting the Fishes; but this title now belongs to alpha Piscium (Al Risha).

“The man whose birth coincides with the rising of Andromeda from the sea will prove merciless, a dispenser of punishment, a warder of dungeon dire; he will stand arrogantly by while the mothers of wretched prisoners lie prostrate on his threshold, and the fathers wait all night to catch the last kisses of their sons and receive into their inmost being the dying breath. From the same constellation comes the figure of the executioner, ready to take money for a speedy death and the rites of a funeral pyre, for him execution means profit, and oft will he bare his axe; in short, he is a man who could have looked unmoved on Andromeda herself fettered to the rock. Governor of the imprisoned he occasionally becomes a fellow convict, chained to criminals so as to save them for execution.” [Manilius,Astronomica, 1st century A.D., Book 5, p.351.]

The astrological influences of the star Mirach

According to Ptolemy it is of the nature of Venus; and, to Alvidas, of Mars and the Moon. It gives personal beauty, a brilliant mind, a love of home, great devotion, beneficence, forgiveness, love, overcoming by kindness, renown, and good fortune in marriage. [Robson, p.178.]

Many interests, tendency to inspiration and medium-ship as a base for artistic creations, altruism, cheerfulness, happiness, love of company. These people have a stimulating effect on others, they make friends easily and are helped on in life by others [Fixed Stars and Their Interpretation, Elsbeth Ebertin, 1928, p.14-15.]

With Sun: Trouble through opposite sex, disappointments in expectations but otherwise favorable. [Robson, p.178.]

With Moon: Trouble with opposite sex owing to indiscretions, bad for domestic affairs, honor through martial matters. [Robson, p.178.]

With Jupiter: Help from women but danger of scandal, much travel, legal or ecclesiastical difficulties. [Robson, p.179.]