The history of the star: Alrisha

from p.342 of Star Names, Richard Hinckley Allen, 1889.
[A scanned copy can be viewed on this webpage 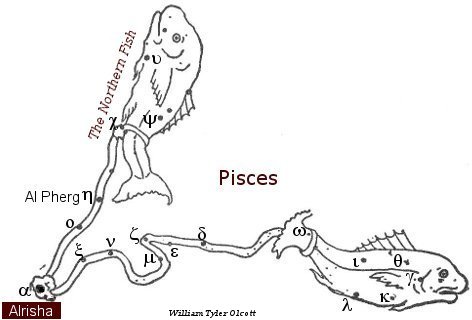 Alpha (α) Pisces, Alrisha, is a double and probably binary, 3.9 and 5.5, pale green and blue. It marks the Knot of the Cord, formed by the joining together of the ends of the ribbons that binds the two Fishes by the tail.

Al Rescha, or Al Rischa, derived from the Arabians’ Al Risha‘, the Cord, is 20° south from the head of Aries, 2°.7 north of the celestial equator, and marks the knot in the united cords of the Fishes; the same title being applied to beta (β) Andromeda (Mirach). This word originally may have come from the Babylonian Riksu, Cord.

Hipparchos (circa 160-120 B.C.) and the second-century Greek astronomer Ptolemy designated it as (Greek) Sundesmos ton Ichthuon, or Ton Linon, the Knot of the Fishes, or of the Threads, varied by  the Greek astronomer Aratus, circa 270 B.C., and Geminos in Desmos; these words being transcribed by Germanicus and the scholiasts as Sundesmos and Desmos. They were rendered by Cicero and others as Nodus, Nodus coelestis, and Nodus Pisces; by Pliny (23-79 A.D.) as Commissura Pisces; and in the 1515 Almagest as Nodus duorum filorum

The Arabians translated these by Ukd al H’aitain, which, as Okda and Kaitain, are not unusual titles now.

The uniting cords, branching from alpha (α Alrisha) through omicron (ο), pi (π), eta (η Al Pherg), and rho (ρ) to the tail of the northernmost Fish, and through xi (ξ), upsilon (υ), mu (μ), , , zeta (ζ), epsilon (ε), and delta (δ) to omega (ω) that marks the tail of the one to the south, were the second-century Greek astronomer Ptolemy’s linon, "thread," the linoi of other authors. Cicero called them Vincla, the Bonds; and the scholiast on Germanicus, Alligamentum linteum or luteum, divided by Hevelius into Linum boreum and austrinum. Some of these terms also were applied to the star delta (δ) as marking one of the cords.

The Arabians knew these cords as Al Hait al Kattaniyy, the Flaxen Thread; and Al Asma’i, about the year 800, mentioned them in his celebrated romance Antarah as a distinct constellation; but Pliny (23-79 A.D.) had done the same long before him.

Al Rischa, although lettered first, is somewhat fainter than gamma (γ) and eta..

The astrological influences of the constellation Pisces

Legend: Venus and her son Cupid while sitting on the bank of the Euphrates suddenly saw Typhon, the enemy of the Gods, approaching them. They leapt into the river and were saved from drowning by two fishes, who were afterwards placed in the heavens by Venus in gratitude for their help. [Robson, p.57.]

Influences: Ptolemy makes the following observations: "Those stars in Pisces which are in the head of the southern fish have the same influence as Mercury, and, in some degree, as Saturn: those in the body are like Jupiter and Mercury: those in the tail and in the southern line are like Saturn, and, moderately, like Mercury. In the northern fish, those on its body and backbone resemble Jupiter, and also Venus in some degree: those in the northern line are like Saturn and Jupiter." By the Kabalists Pisces is associated with the Hebrew letter Pé and the 17th Tarot Trump "The Stars." [Robson, p.57.]

The astrological influences of the constellation Pisces given by Manilius:

"The folk engendered by the two Fishes, the last of the signs, will possess a love of the sea: they will entrust their lives to the deep, will provide ships or gear for ships and everything that the sea requires for activity connected with it. The consequent skills are numberless: so many are the components of even a small ship that there are scarcely enough names for things. There is also the art of navigation, which has reached out to the stars and binds the sea to heaven. The pilot must have sound knowledge of the earth, its rivers and havens, its climate and winds; how on the one hand to ply the mobile helm this way and that, and brake the ship and spread apart the waves, and how on the other to drive the ship by rowing and to feather the lingering blades. The Fishes further impart to their son the desire to sweep tranquil waters with dragnets and to display on shores which are their own the captive peoples of the deep, either by hiding the hook within the bait or the guile within the weel. Naval warfare too is of their gift, battles afloat, and blood-stained waves at sea. The children of this sign are endowed with fertile offspring, a friendly disposition, swiftness of movement, and lives in which everything is ever apt to change. [Astronomica, Manilius, 1st century AD, book 4, p.243.]