The history of the star: Mekbuda 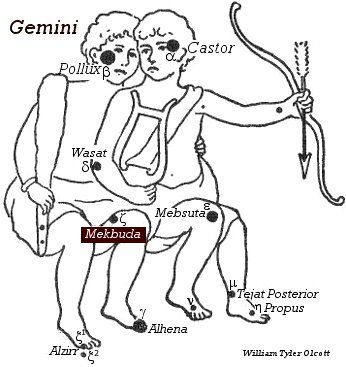 Mekbuda is from Al Makbudah, Contracted, the Arabic designation for the drawn-in paw of the ancient Asad*; but some, with less probability, derive it from Al Mutakabbidah, a Culminating Star.

* Arabs had an enormous Lion, their early Asad, extending over a third of the heavens, of which the stars Arcturus and Spica were the shin-bones; Regulus, the forehead; the heads of Gemini, one of the fore paws; Canis Minor, the other; and Corvus, the hind quarters. Many Arab starnames come from this tradition. Star Names p.97.