The history of the star: Mebsuta 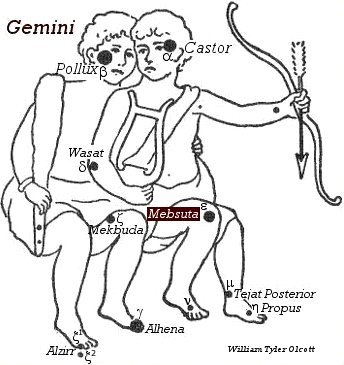 Epsilon (ε) Gemini, Mebsuta, is a double star, 3.4 and 9.5, brilliant white and cerulean blue, on the right knee of the Twin Castor

Mebsuta is from Al Mabsutat, the Outstretched, from its marking the extended paw of the early Arabic Lion**, but now it is on the hem of Castor‘s tunic. Burritt’s Atlas of 1856 had it Melucta in his Geography, and Mebusta in his Atlas; Professor Young, following English globes, has Meboula; and elsewhere we find Menita, Mesoula, and Mibwala

Epsilon (ε Mebsuta), delta (δ Wasat), lambda (λ), and others near by, were the Chinese Tung Tsing

**[Arabs had an enormous Lion, their early Asad, extending over a third of the heavens, of which the stars Arcturus and Spica were the shin-bones; Regulus, the forehead; the heads of Gemini, one of the fore paws; Canis Minor, the other; and Corvus, the hind quarters. Many Arab starnames come from this tradition. Star Names p.97.]