The history of the star: Lesath 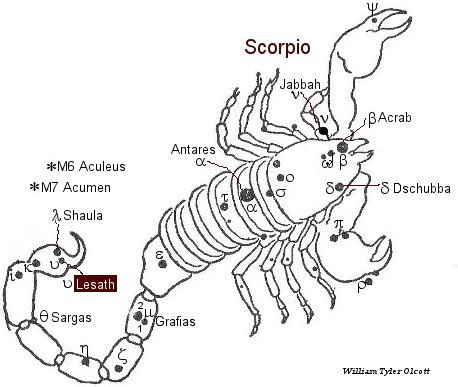 The two stars; upsilon (υ) Scorpius, Lesath, along with Shaula, lambda (λ) Scorpius; are at the tip of the tail of the Scorpion and right on the sting.

Lesos is Greek for sting, Latin has puncturascorpionis, “the sting of the scorpion”.

Lesath, or Lesuth, is from Al Las’ah, the Sting, which, with lambda (λ Shaula), it marks; yet the English astronomer Smyth (1788-1865), who treats of these two stars at considerable length, says that the word is {p.372.} formed by the 16th century French scholar Scaliger’s conjecture from Alascha, which is a corruption of alshaulah. Lesath, therefore, is not a term used by the Arabs, who designate all these bumps, which form the tail, Alfikrah, vertebrated twirls; they are formed by epsilon (ε), mu (μ), zeta (ζ Grafias), eta (η), iota (ι), kappa (κ), lambda (λ Shaula) and upsilon (υ this star Lesath), and it is supposed that the sting, punctura scorpionis, was formerly carried to the following star, gamma (γ), marked nebulous by the second-century Greek astronomer Ptolemy.

But this gamma (γ) is surely wrong; that letter really applying to a star in the right claw very far to the west of the sting,— as far as the make-up of the creature will allow. Still Burritt’s Atlas of 1856 located it as the English astronomer Smyth (1788-1865) did. The Persian astronomer Al Biruni (973-1048 A.D.) wrote that lambda (λ) and upsilon (υ, this star Lesath) were in the Harazah, the Joints of the Vertebrae. The Italian astronomer Riccioli (1598-1671) mentioned upsilon (υ) as lesathvel potiusLessaa Elaakrab Morsum Scorp. velDenneb Elaa-krab; and the 17th century German astronomer Bayer, Leschatrectelesath, Moschleck, Alascha, which we have seen for lambda (λ Shaula); but the proximity of these stars renders this duplication not unnatural.

The Chinese knew them as Keen Pi, the Two Parts of a Lock. The German astronomer Ideler (1766-1846) thought upsilon (υ this star Lesath) the gamma (γ) of Telescopium, but this does not agree with Bode’s drawing of the latter.

This star upsilon (υ Lesath), and lambda (λ Shaula) were the 17th manzil (Arabic Moon Mansion), Al Shaulah, The Sting, or the Two Releasers, perhaps from the Vedic opinion that they brought relief from lingering disease. [Star Names, p.370.]

With Moon transiting here: buy cattle, hunt but do not marry. [Robson, p.73.]

This star upsilon (υ Lesath), and lambda (λ Shaula) were the 17th nakshatra (Hindu Moon Mansion) Vicritau. Some Hindu authorities, taking in all the stars from epsilon to upsilon (υ Lesath), called the whole Mula, the “Root”, with the divine Nirrity, Calamity, as regent of the asterism, which was represented as a Lion’s Tail; this title appearing also for stars of Sagittarius. [Star Names, p.370.]

Influences of the 17th Hindu Moon Mansion Mula: Ruled by the Dragon’s Tail. A sharp asterism belonging to the butcher caste and favorable for punishment, torture, imprisonment, exorcism, mesmerism and separation or union when containing the Moon. Those born on the lunar day will be druggists, dealers in flowers and fruit, rich and fond of gardening. With Moon here at birth native will be conceited, wealthy, luxurious, kind-hearted, happy and resolute. Rules stables and the left side of the body. [Robson, p.82.]

The astrological influences of the star Lesath

Of the nature of Mercury and Mars. It gives danger, desperation, immorality and malevolence, and is connected with acid poisons. [Robson, p.173.]

In close conjunction with lambda Scorpio Shaula, both in the ‘Tail end of the Scorpion’, has a Mars nature blended with Mercurian influence. According to tradition, Lesath in conjunction with Mars, Uranus or Saturn, MC or Ascendant could point to danger from wild animals, either to be ripped up by them, massacred, or torn into pieces. This medieval interpretation is no longer correct in these days. At present, a configuration involving this star points to accidents, catastrophes, or operations. Corresponding to the sign Scorpio, this could work with appendicitis, appendectomy, or removing of hemorrhoids by operation. If associated with a benefic stellar body and if channeled in the right direction, there is the possibility that the energy associated with the Mars nature can make for marked achievements. [Fixed Stars and Their Interpretation, Elsbeth Ebertin, 1928, p.73.]

Not unexpectedly it gets a Mercury-Mars rating from Ptolemy, what else for deft and swift injector like this? Its qualities in the horoscope are very much those of a probing, sharp intellect and incisive wit, every bit as damaging as a knife to its opponent. It is one of the three Scorpio stars in Sagittarius which can be held to account for the often surprising bite in the otherwise genial, jovial Sagittarian (other stars in the tail of Scorpio; Aculeus and Acumen). It does show them to have an enterprising spirit of keenness of insight, not always thought of in connection with that religio-philosophical ninth sign of the zodiac. People with star strong in their charts are noted for doing well in debate, business, sport, and high office in general. If not well aspected, though, they can be inclined to strike first and ask afterwards, with an embarrassing loss of face. [The Living Stars, Dr. Eric Morse, p.85-86.]