The history of the star: Acumen 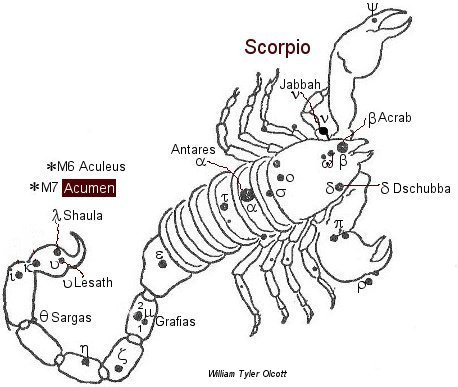 M7 is an open cluster of stars above the sting of the Scorpion, Scorpius. A companion cluster to Aculeus

WikipediasaysMessier 7(also known as M7, NGC 6475, or thePtolemy Cluster) is an open cluster in the constellation Scorpius. Sometimes referred to asAkumen

The Akkadians called Scorpio, Girtab, the “Seizer”, or “Stinger”, and the Place where One Bows Down, titles indicative of the creature’s dangerous character; and referring to the striking curve of stars which lies in a dark portion of the Milky Way that forms the tail of the Scorpion, terminating in the poisonous upturned stinger, as if ready for an attack. [Star Names, p.362.]

The word acumen comes from the Indo-European root ak- “sharp”, “high point”, with a number of related words. See the IE root ak- on this page

Isaac Mozeson author of “The Word“, says about Acumen

“It means sting in Latin, smarts in English. [K]HaKHMaH means smart in Hebrew. Either way, it smarts (hurts). Beyond other things said about the sting root in Indo-European and Edenic, QaM means an enemy, or literally one who rises up against you”.

“ACUMEN is a Latin word meaning mental acute-ness as well as a point and a sting. The IE root is ak, signifying sharpness. Hebrew HAKH’MA means intelligence and skill, a word of mental acuity with many sharp branches”.

BRANCHES: To sting is Hebrew OKUTZ or HEKESH. HOAKH is a briar or thorn, while English COG is a tooth. HAKU is a fishhook and HAKA is to angle (for fish) or to wait. The KM element of HAKHMA recalls the objects of wisdom: the KUMA (how much), the KIMO (in common) and the KAMOOS (hidden, concealed). Psalms11110: At the head of wisdomis awe for God.” [The Word, dictionary, Isaac Mozeson, Edenic (Biblical Hebrew), SPI books, ISBN 15671-942-0].

The astrological influences of Acumen

[Acumen is a companion cluster of star to Aculeus and of the same nature and influence.] Influences of these two clusters: Of the nature of Mars and the Moon. It effects the eyesight and causes blindness of one or both eyes, if in conjunction with an afflicted luminary or in conjunction with a malefic that afflicts the luminaries. The opposition seems to be equally important. [Robson, p.117.]

This star along with Aculeus has a notorious reputation in astrology as ‘blind stars’ or stars associated with eyesight problems. These stars shows up a negative Mars-Moon quality in people who have them poorly aspected, with a tendency towards a morbid outlook, seeing the worst rather than the best in everything. If their religious views are affected, as so often with anything in Sagittarius, there is a tendency to be either the ‘hellfire and damnation brigade’ or to take up a fierce anti-religious and even anti-God stance. But at their best, well aspected, they can have very sharp minds and a perception well above average as though, perhaps ‘blind’ to what we see and take for granted, they see what we do not, at levels where eyesight does not reach. Not for nothing has the word Acumen come down to us as a term for a sharp mind. [The Living Stars, Dr. Eric Morse, p.86-87.]