The history of the star: Shaula

from p.370 of Star Names, Richard Hinckley Allen, 1889.
[A scanned copy can be viewed on this webpage 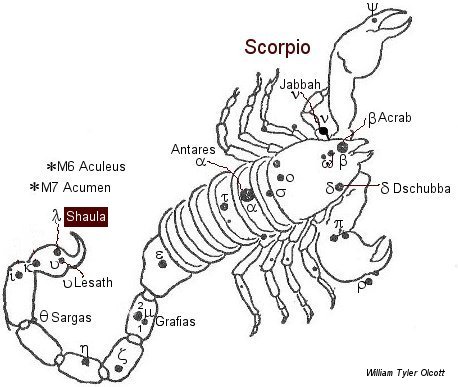 Lambda (λ) Scorpius, Shaula, is a star on the raised tail of the Scorpion.

Shaula probably is from Al Shaulah, the Sting, where it lies; but, according to the Persian astronomer Al Biruni (973-1048 A.D.), from Mushalah, Raised, referring to the position of the sting ready to strike. These words have been confused with the names for the adjoining upsilon (υ Lesath), and in the course of time corrupted to Shauka, Alascha, Mosclek, and Shomlek; English writer on globes John Chilmead (circa 1639) writing of these last:

“It is also called Schomlek, which the 16th century French scholar Scaliger thinkes is read by transposition of the letters for Mosclek, which signifieth the bending of the taile.”

Naturally it was an unlucky star with astrologers.

This star lambda (λ Shaula) and upsilon (υ Lesath) were the 17th manzil (Arabic Moon Mansion), Al Shaulah, and the nakshatra (Hindu Moon Mansion) Vicritau, the Two Releasers, perhaps from the Vedic opinion that they brought relief from lingering disease.

Some Hindu authorities, taking in all the stars from epsilon (ε) to upsilon (υ), called the whole Mula, the Root, with the divine Nirrity, Calamity, as regent of the asterism, which was represented as a Lion’s Tail; this title appearing also for stars of Sagittarius. In Coptic people of Egypt Egypt lambda (λ) and upsilon (υ) were Minamref, the Sting; and, on the Euphrates, Sarur

This star lambda (λ Shaula) and upsilon (υ Lesath) were the 17th manzil (Arabic Moon Mansion), Al Shaulah, The Sting, or the Two Releasers, perhaps from the Vedic opinion that they brought relief from lingering disease. [Star Names, p.370.]

With Moon transiting here: buy cattle, hunt but do not marry. [Robson, p.73.]

This star lambda (λ Shaula) and upsilon (υ Lesath) were the 17th nakshatra (Hindu Moon Mansion) Vicritau. Some Hindu authorities, taking in all the stars from epsilon to upsilon (υ Lesath), called the whole Mula, the “Root”, with the divine Nirrity, Calamity, as regent of the asterism, which was represented as a Lion’s Tail; this title appearing also for stars of Sagittarius. [Star Names, p.370.]

Influences of the 17th Hindu Moon Mansion Mula: Ruled by the Dragon’s Tail. A sharp asterism belonging to the butcher caste and favorable for punishment, torture, imprisonment, exorcism, mesmerism and separation or union when containing the Moon. Those born on the lunar day will be druggists, dealers in flowers and fruit, rich and fond of gardening. With Moon here at birth native will be conceited, wealthy, luxurious, kind-hearted, happy and resolute. Rules stables and the left side of the body. [Robson, p.82.]

The astrological influences of the star Shaula

The two stars; upsilon (υ) Scorpius, Lesath, along with this star Shaula, lambda (λ) Scorpius; are at the tip of the tail of the Scorpion and right on the sting.

Lesath, Upsilon (υ), is in close conjunction with lambda (λ) Scorpio, Shaula, both in the ‘Tail end of the Scorpion’, and have a Mars nature blended with Mercurian influence. According to tradition, Lesath [and Shaula] in conjunction with Mars, Uranus or Saturn, MC or Ascendant could point to danger from wild animals, either to be ripped up by them, massacred, or torn into pieces. This medieval interpretation is no longer correct in these days. At present, a configuration involving this star points to accidents, catastrophes, or operations. Corresponding to the sign Scorpio, this could work with appendicitis, appendectomy, or removing of hemorrhoids by operation. If associated with a benefic stellar body and if channeled in the right direction, there is the possibility that the energy associated with the Mars nature can make for marked achievements. [Fixed Stars and Their Interpretation, Elsbeth Ebertin, 1928, p.73.]

Of the nature of Mercury and Mars. It gives danger, desperation, immorality and malevolence, and is connected with acid poisons. [Robson, p.173, under Lesath.]