The history of the star: Keid 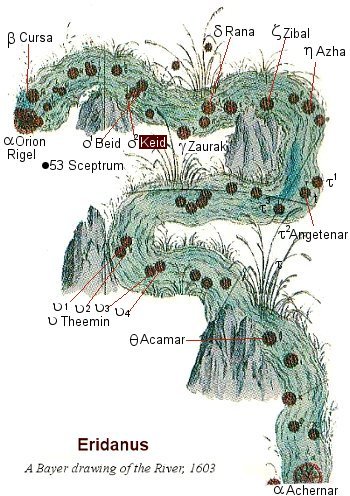 The Arabic spelling for Keid is Al-Qaid (), “The broken egg-shells”. Omicron (ο)Eridanus is the Keid of modern lists, Burritt’s Atlas of 1856 Kied, from Al Kaid, the Egg-shells, thrown out from the nest close by. [The Ostrich’s Nest were eta (Azha) zeta (Zibal) and rho]. Abbe Hell used it in the construction of his constellation Psalterium (Psalterium Georgii, Harpa Georgii, was a constellation created in 1789 to honor George III of Great Britain from parts of Eridanus. It is no longer in use).