The history of the star: Azha

from p.218 of Star Names, Richard Hinckley Allen, 1889.
[A scanned copy can be viewed on this webpage 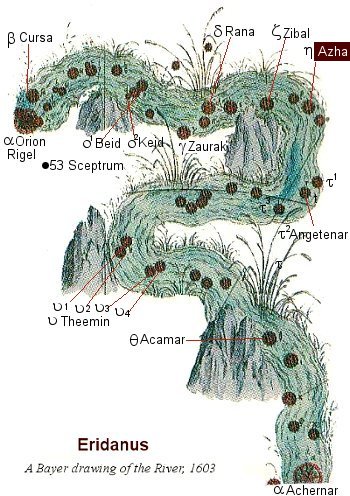 Eta (η) Eridanus, Azha, is a pale yellow star in the River.

Azha is supposed to have been the Azha of the 10th century Persian astronomical writer Al Sufi, and the equivalent Ashiyane of the Persians, and was known by the 13th century Persian astronomical writer Al Kazwini as Al Udhiyy, being {p.219} chief among the stars of the Ostrich’s Nest, which the word signifies. The other components were zeta (ζ Zibal), rho (ρ), and sigma (σ); but this last, the 17th of the second-century Greek astronomer Ptolemy, is not now to be identified in the sky, although it may be one of the three stars rho (ρ) displaced by proper motion since the second-century Greek astronomer Ptolemy’s time.

Near eta (η this star Azha), towards tau (τ Angetenar), are some other stars — epsilon (ε) and pi (π) Cetus among them — which in early days were included in the Nest, but later were set apart by the 10th century Persian astronomical writer Al Sufi as Al Sadr al Ketus, the Breast of the Whale (Cetus).