The history of the star: Jabbah 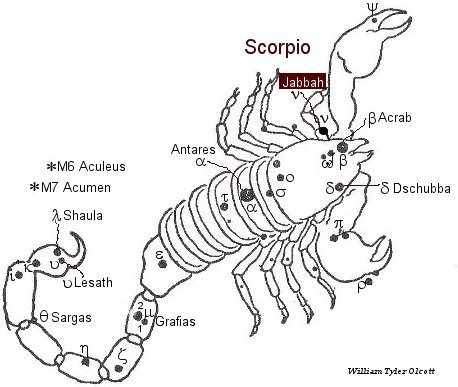 Nu (ν) Scorpius, Jabbah, is a quadruple, “double double”, star on the head of the Scorpion, lying east of beta (β Acrab).

Jabbah in the Century Cyclopedia, perhaps from its being one of the 15th manzil (Arabic Moon Mansion) Iklil al Jabhah, “the Crown of the Forehead”.

The Arabic spelling for this star is Al-Jabhah (), “The forehead” of the scorpion, Scorpius. This star, Jabbah (nu), along with the other stars on the Head of the Scorpion; Acrab (beta), and Dschubba (delta), were the Euphratean Gis-gan-gu-sur, “the Light of Hero”, or “the Tree of the Garden of Light “. In Mesopotamian these were Jia Jan Ju Sur which seems to have meant “the forbidden Tree of Life in Eden” [Star Names, under Acrab].

This star in the head of the Scorpion is named Jabbah in the Century Cyclopedia, perhaps from its being one of the 15th manzil (Arabic Moon Mansion) Iklil al Jabhah, “the Crown of the Forehead”. The 15th manzil included Acrab (β Scorpius), delta (δ, Dschubba) and pi (π); some authorities occasionally adding nu (ν, Jabbah, as the name of the manzil would suggest; Jabhab) and rho (ρ). This was one of the fortunate stations, and from this manzil title comes the occasional Iclil (Arabic for a jewel).