The history of the star: Acrab

from p.367 of Star Names, Richard Hinckley Allen 1889.
[A scanned copy can be viewed on this webpage 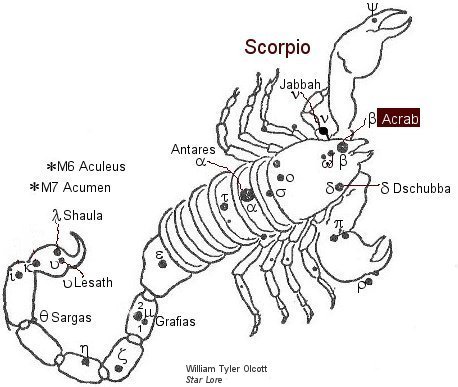 On page 369 of Star Names under Dschubba, Allen says that this star, Acrab (β, beta), “along with the other stars on the Head of the Scorpion; Dschubba (δ, delta), and Jabbah (ν, nu) were the Euphratean Gis-gan-gu-sur, ‘the Light of Hero’, or ‘the Tree of the Garden of Light ‘, “placed in the midst of the abyss,” and so reminding us of that other tree, the Tree of Life, in the midst of the Garden of Eden”. This star, Acrab, β, and δ (Dschubba) was selected by the Babylonian astronomers, to point out their 23d ecliptic constellation, which the German orientalist Epping called Qablu (und qabusha rishu aqrabi, “the Middle of the Head of the Scorpion.”

Graffias, a title for this star Acrab, generally is said to be of unknown derivation; but since Greek Grapsaios signifies “Crab,” it may be that here lies the origin of the title, for it is well known that the ideas and words for crab and scorpion were almost interchangeable in early days, from the belief that the latter creature was generated from the former [note by Allen: This was held even by the learned Saints Augustine and Basil of the 4th century, and confidently expressed by Saint Isidore in his OriginesetEtymologiae —The Etymologies of Isidore of Seville]. It was thought by Dutch scholar Grotius (1583-1645) to be an Arabian designation for the Claws of the double constellation (Libra and Scorpius); and the 17th century German astronomer Bayer said the same, although he used the word for xi (ξ) Scorpius in the modern northern claw. In Burritt’s Atlas of 1835 it appears for xi (ξ) of the northern Scale (of Libra), the ancient northern Claw; but in the edition of 1856 he applied it to this star, beta (β) Scorpius, and in both editions he has a second beta (β) at the base of the tail, west of the star epsilon (ε). The CenturyDictionary prints it Grassias, probably from erroneously reading the early type for the letter . Beta (β Acrab) is near the junction of the left claw with the body, or in the arch of the Kite bow, 8° or 9° northwest of Antares. In some modern lists it is Acrab,— the 17th century Italian astronomer Riccioli’s Aakrab schemali

It was included in the 15th manzil (Arabic Moon Mansions), Iklil al Jabhab, the Crown of the Forehead (of the Scorpion), just north of which feature it lies, taking in with this, however, the other stars to delta (δ, Dschubba) and pi (π); some authorities occasionally adding nu (ν, Jabbah) and rho (ρ). This was one of the fortunate stations, and from this manzil (Arabic Moon Mansion) title comes the occasional Iclil (Arabic for a jewel).

The Hindus knew the group as their 15th nakshatra (Hindu Moon Mansion), Anuradha (In Hinduism, Anuradha, Sanskrit: Anurādhā, is a goddess of good luck. According to Wikipedia Anuradha is the 17th nakshatra; Adrusta Devatha), Propitious or Successful,— Mitra, the Friend, one of the Adityas (Devas), being the presiding divinity; and they figured it as a Row or Ridge, which {368} the line of component stars well indicates.

The corresponding sieu (Chinese Moon Mansion), Fang (Fáng Xiù), a Room or House, anciently Fong, consisted of beta (β, this star Acrab) with delta (δ, Dschubba ), pi (π), and rho (ρ), although  the 19th American philologist Professor Whitney thought it limited to the determinant pi (π), the faintest of the group and farthest to the south. It shared with Antares the title Ta Who, and was the central one of the seven lunar asterisms making up the Azure Dragon, Tsing Lung. But individually beta (β, this star Acrab) seems to have been known as Tien Sze, the Four-horse Chariot of Heaven, and was worshiped by all horsemen. It probably also was Fu Kwang, the Basket with Handles, and highly regarded as presiding over the rearing of silkworms, and as indicating the commencement of the season of that great industry of China.

Acrab (β Scorpius) was included in the 15th manzil (Arabic Moon Mansions), Iklil al Jabhab, the Crown of the Forehead (of the Scorpion), just north of which feature it lies, taking in with this, however, the other stars to delta (δ, Dschubba) and pi (π); some authorities occasionally adding nu (ν, Jabbah — as the name of the manzil would suggest  — Jabhab) and rho (ρ). This was one of the fortunate stations, and from this manzil title comes the occasional Iclil (Arabic for a jewel).

The Hindus knew the group [this star beta, Acrab, with delta, Dschubba, and pi Scorpius as their 15th nakshatra (Hindu Moon Mansion), Anuradha. In Hinduism, Anuradha, Sanskrit: Anurādhā, is a goddess of good luck, another title for this group was translated as Propitious or Successful,— Mitra, the Friend, one of the Adityas (Devas), being the presiding divinity; and they figured it as a Row or Ridge, which the line of component stars well indicates. [Allen, p.368].

Influences of the 15th Hindu Moon Mansion Anuradha: Ruled by Saturn. A soft asterism belonging to the Shudra caste and favorable for friendship, married love, purchase and making of clothes and ornaments, music and auspicious deeds when containing the Moon. Those born on the lunar day will be valiant, influential and keep vehicles. With Moon here at birth native will be wealthy, of wandering habits, unable to bear hunger and resident abroad. Rules fields overgrown with flowers, and the stomach. [Robson, p.81.]

“By virtue of his tail armed with its powerful sting, wherewith, when conducting the Sun’s chariot through his sign, he cleaves the soil and sows seed in the furrow, the Scorpion creates natures ardent for war and active service, and a spirit which rejoices in plenteous bloodshed and in carnage more than in plunder. Why, these men spend even peace under arms; they fill the glades and scour the woods; they wage fierce warfare now against man, now against beast, and now they sell their persons to provide the spectacle of death and to perish in the arena, when, warfare in abeyance, they each find themselves foes to attack. There are those, too, who enjoy mock-fights and jousts in arms (such is their love of fighting) and devote their leisure to the study of war and every pursuit which arises from the art of war.” [Manilius, Astronomica, 1st century AD, p.239-240.]

The astrological influences of the star Acrab

Please note: This star, Acrab, or beta Scorpius, is listed under the name Graffias in Robson’s book.

According to Ptolemy it is of the nature of Mars and Saturn; and, to Alvidas, of Jupiter in square to Saturn and the Moon. It causes extreme malevolence, mercilessness, fiendishness, repulsiveness, malice, theft, crime, pestilence, and contagious diseases. [Robson, p.169.]

This star and Dschubba (both stars on the head of Scorpio) are supposed to correspond to a Mars character with a blend of Saturn characteristics. Dr Koch is of the opinion that both these stars are ‘doubtful’. The effect of these two stars has yet to be researched more fully. According to tradition, these stars are credited with giving the ability to do research, and especially research into things of a particularly secret and hidden nature. For this to be however, further influence of the sign Scorpio and planets Mercury and Uranus have also to be present; preferably these stellar bodies would be positioned on the MC or Ascendant and be near another stellar body pointing to mental capabilities. In lower types, however, a tendency to falsehood and treason can be noted. Both stars are a poor augury for material wealth. There will be difficulties, impediments, or loss, dependent upon the position these have in the cosmogram. In mundane maps, there is an indication of mass catastrophes, should either Mars, Saturn or Uranus be in these first degrees of Sagittarius, especially in an angular position. [Fixed Stars and Their Interpretation, Elsbeth Ebertin, 1928, p.69.]

With Sun: Materialistic, too active a mind, ecclesiastical difficulties, bad health. Otherwise similar to the effect if rising. [Robson, p.169.]

With Mars: Athletic, suffers from over-exertion, goes to extremes, active mind, favorable for money matters but extravagant and has many debts. [Robson, p.169.]