The history of the star: Dschubba

from p.369 of Star Names, Richard Hinckley Allen, 1889.
[A scanned copy can be viewed on this webpage 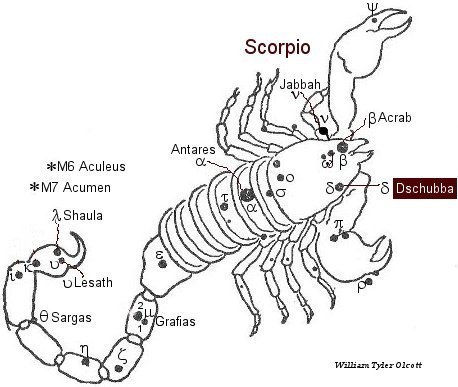 Delta (δ) Scorpius, Dschubba, is a star on the forehead of the Scorpion.

Dschubba is found in the Whitall Planisphere, probably from Al Jabhah, the Front, or Forehead, where it lies.

In the Palermo Catalogue the title Iclarkrav is applied to a star whose assigned position for the year 1800 would indicate our delta (δ Dschubba). If this be the case, it may have been a specially coined word from the Arabs’ Iklil al Akrab, the Crown of the Scorpion.

Delta (δ Dschubba) was of importance in early times, for with beta (β Acrab) and pi (π), on either side in a bending line, it is claimed for the Euphratean Gis-gan-gu-sur, the Light of the Hero, or the Tree of the Garden of Light, “placed in the midst of the abyss,” and so reminding us of that other tree, the Tree of Life, in the midst of the Garden of Eden. It was selected by the Babylonian astronomers, with beta (β Acrab), to point out their 23rd ecliptic constellation, which the German orientalist Epping calls Qablu (und qabu) sha rishu aqrabi, the Middle of the Head of the Scorpion. The earliest record that we have of the planet Mercury is in connection with these same two stars seen from that country 265 B.C.

In the lunar zodiac delta (δ Dschubba), beta (β Acrab), and pi (π) were the Persian Nur, Bright; the Sogdian Iranian and Khorasmian (east of Persia) Bighanwand, Clawless; and the Coptic people of Egypt Stephani, the Crown.

In China the 2d-magnitude epsilon (ε), with mu (μ), zeta (ζ), eta (η), theta (θ), iota (ι), kappa (κ), upsilon (υ) and lambda (λ), formed the 17th sieu (Chinese Moon Mansion), Wei, the Tail, anciently known as Mi and as Vi, mu (μ) being the determinant; but, although this Tail coincided with that part of our Scorpion, Brown thinks that reference is rather made to the tail of the Azure Dragon, one of the quadripartite divisions of the Chinese zodiac which lay here.

This star delta (δ Dschubba), along with beta (β Acrab), and pi (π) Scorpius, formed the Arabic 15th manzil (Arabic Moon Mansion) Iklil al Jabhab, the Crown of the Forehead of the Scorpion. Another title for Dschubba was Iclarkrav coined from from the Arabic Iklil al ‘Akrab, the “Crown of the Scorpion”, or sometimes referred to as just Iclil; Iclil is the Arabic word for ‘jewel’. This was one of the fortunate stations. [Star Names, p. 367, under Acrab

The Hindus knew the group [beta (β Acrab), with this star delta (δ Dschubba), and pi (π) Scorpius] as their 15th nakshatra (Hindu Moon Mansion), Anuradha In Hinduism, Anuradha, Sanskrit: Anurādhā, is a goddess of good luck, another title for this group was translated as Propitious or Successful,— Mitra, the Friend, one of the Adityas (Devas), being the presiding divinity; and they figured it as a Row or Ridge, which the line of component stars well indicates. [Allen p.367.]

Influences of the 15th Hindu nakshatra, Anuradha: Ruled by Saturn. A soft asterism belonging to the Shudra caste and favorable for friendship, married love, purchase and making of clothes and ornaments, music and auspicious deeds when containing the Moon. Those born on the lunar day will be valiant, influential and keep vehicles. With Moon here at birth native will be wealthy, of wandering habits, unable to bear hunger and resident abroad. Rules fields overgrown with flowers, and the stomach. [Robson, p.81.]

The astrological influences of the star Dschubba

Note: This star, Dschubba, δ Scorpio is listed as Isidis in Robson’s book Fixed Stars and Constellations in Astrology.

According to Ptolemy it is of the nature of Mars and Saturn; and to Alvidas, of Jupiter in square to the Moon. It causes sudden assaults, malevolence, immorality and shamelessness. [Robson, p.172.]

These stars, Dschubba, and Acrab, are positioned next to each other in the Scorpion’s head, they are supposed to correspond to a Mars character with a blend of Saturn characteristics. Dr Koch is of the opinion that both these stars are ‘doubtful’. The effect of these two stars has yet to be researched more fully. According to tradition, these stars are credited with giving the ability to do research, and especially research into things of a particularly secret and hidden nature. For this to be however, further influence of the sign Scorpio and planets Mercury and Uranus have also to be present; preferably these stellar bodies would be positioned on the MC or Ascendant and be near another stellar body pointing to mental capabilities. In lower types, however, a tendency to falsehood and treason can be noted. Both stars are a poor augury for material wealth. There will be difficulties, impediments, or loss, dependent upon the position these have in the cosmogram. In mundane maps, there is an indication of mass catastrophes, should either Mars, Saturn or Uranus be in this first degrees of Sagittarius, especially in an angular position. [Fixed Stars and Their Interpretation, Elsbeth Ebertin, 1928, p.69.]

Situated on the head of the Scorpion, not where its armament is, which is at the rear. It is a fighter of great skill and characterizes Mars-Saturn perfectly. Anyone with this star strong in their horoscope is likely to show a patient and wary approach to any situation, but this will belie the skilled determination which will then be brought to bear. Scorpio is famous for the surgeons born in it and this star shows up just the qualities which they need to have. The same applies to generals, policemen, private investigators and secret service agents, many of whom have this star well placed and aspected. In research of all other kinds too, it distinguishes the real adept. [The Living Stars, Dr. Eric Morse, p.84-85.]