The history of the star: Hatsya

from p.317 of Star Names, Richard Hinckley Allen, 1889.
[A scanned copy can be viewed on this webpage 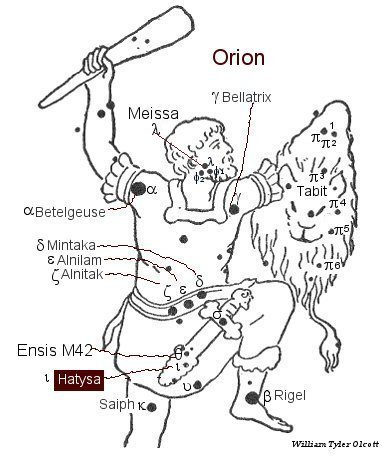 Al Tizini (Arabian astronomer, first half of 16th century) designated this as Na’ir al Saif, the Bright One in the Sword, but it is practically unnamed with us [Wikipedia says it is a traditional name; “sometimes with the typographic error Hatysa.”], although far more deserving of the title Saiph than is the succeeding star kappa (κ Saiph).

In China it was Fa, a Middle-man, upsilon (υ) and intermediate stars being included under this name; but Edkins translates the word “Punishment,” and gives another title for it, — Tui, or Jui, the Sharp Edge, analogous to the Arabian Saif and perhaps taken from it.