The history of the star: Giedi Prima 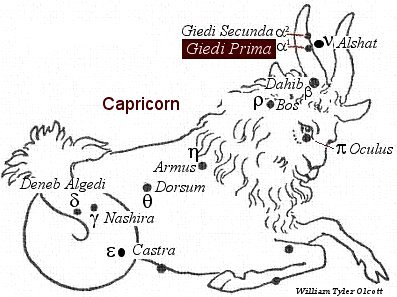 These are the Prima and Secunda Giedi, or plain Algedi, from the Arabian constellation title Al Jady (Arabic jadi or jady means goat).

Other titles, Dabih and the degenerated Dschabbe and Dshabeh, applied to them, but more commonly to beta (β Dahib), have been traced by some to Al Jabbah, the Forehead, although the stars are nearer the tip of the horn; but the names undoubtedly come from Al Sa’d al Dhabih, the Lucky One of the Slaughterers, the title of the 20th manzil (Arabic Moon Mansion of which these alphas and beta (β Dahib) were the determinant point), manifestly referring to the sacrifice celebrated by the Arabs at the heliacal rising of Capricorn. And of similar signification was the Euphratean Shak-shadi and the Coptic people of Egypt Eupeutos, or Opeutus, for the same lunar asterism of those peoples.

Brown thinks that alpha (α), then seen only as a single star, with beta (β Dahib) and nu (ν Alshat) was known by the Akkadians as Uz, the Goat; and as Enzu in the astronomy of their descendants; while the German orientalist Epping is authority for the statement that this, or perhaps beta (β Dahib), marked the 26th ecliptic asterism of the Babylonians, Qarnu Shahu, the Horn of the Goat. Brown also says that alpha (α) represented the 8th antediluvian king Amar Sin,— Amempsinos (“Amempsinos is probably Amelu-Sin”).

In Hipparchos’ (circa 160-120 B.C.) time the two alphas were but 4′ apart, and it was not till towards the 17th century German astronomer Bayer’s day that they had drifted sufficiently away from each other to be readily separated by the naked eye. Their distance in 1880 was 6 1/4′, and this is increasing by 7″ in every hundred years.

Al Sa’d al Dhabih, the Lucky One of the Slaughterers, the title of the 20th manzil (Arabic Moon Mansion) of which these alphas; (this star alphaGiedi Prima), alpha² (Giedi Secunda) and beta (β Dahib) were the determinant point.

The astrological influences of the star Giedi Prima

According to Ptolemy it is of the nature of Venus and Mars; to Simmonite, of Venus and Mercury; and, to Alvidas, of Uranus in sextile to Venus. It gives beneficence, sacrifice and offering. [Robson, p.167-168.]

Associated with piety and self-sacrifice. [Larousse Encyclopedia of astrology].

With Mercury: Romantic, psychic, vacillating, many love affairs some of which cause notoriety, may elope with married person. [Robson, p.168.]

With Venus: Many strange and unexpected events, peculiar and romantic marriage, may be separated for years from partner through secret government or political reasons of which even native may be ignorant. [Robson, p.168.]

With Saturn: Genius but kept down by circumstances, peculiar and occult early environment, birth amidst strange conditions while mother is travelling, many narrow escapes, associated with the stage, rarely marries. [Robson, p.168.]

With Uranus: Peculiar environment, bad morals, strong passions, genial, affectionate, vacillating, small self confidence, too trusting, peculiar ideas on marriage and religion, ambitious but too weak to rise, bad for domestic affairs and children, if any, though there may be illegitimate ones, violent death. [Robson, p.168.]

With Neptune: Psychic in childhood, never understood by others, cruelty from a parent, many disappointments, peculiar conditions in domestic life, greatly influenced by others, accidents, death in early life or middle age. [Robson, p.169.]