The history of the star: Dahib 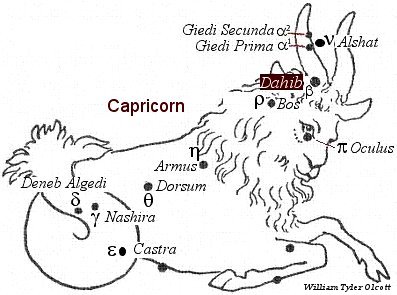 Beta (β) Capricornus, and beta (β), Dahib, each very closely double, orange yellow and sky blue, marking the head of the Goat, the components are about 3 minutes distant from each other.

Dabih Major and Dabih Minor are the names of this so-called double, but telescopically multiple, star, taken from the title of the Arabic 20th manzil (Arabic Moon Mansion) of which, with alpha (α), it formed part.

Dabih is from Arabic Sa’d adh-dhabih (), “The lucky star of the slaughterer”, manifestly referring to the sacrifice celebrated by the Arabs at the helical rising of Capricorn. And of similar signification was the Euphratean Shak-shadi and the Coptic Eupeutos, or Opeutus, for the same lunar asterism of those peoples. This name indicates that the Moon Mansion served to signal the beginning of a winter ritual.

In China it was in some way intimately connected in religious worship with the rearing of the silkworm in that country.

Al Sa’d al Dhabih, the Lucky One of the Slaughterers, the title of the 20th manzil (Arabic Moon Mansion) of which the two alphas; alpha (Giedi Prima), alpha² (Giedi Secunda), and this star beta (β Dahib) were the determinant point.

The astrological influences of the star Dahib

According to Ptolemy it is of the nature of Saturn and Venus; and, to Alvidas, of Uranus and Saturn conjoined in square to Mercury. [Robson, p.157.]

Venusian and Saturnian in nature; indicating a tendency to melancholy. [Larousse Encyclopedia of astrology].

With Moon: Successful in business but retires under a cloud, favorable for wealth, influential position but scarcely realizes ambitions, trouble through opposite sex, deserved criticism and censure. [Robson, p.157.]

With Uranus: Strange and peculiar experiences, many ups and downs, much suffering, loses friends through deception, disappointed ambitions, losses of a Mercurial nature, unfavorable for domestic affairs, terror of death, dies after a lingering illness. [Robson, p.158.]