Canes Venatici represents two dogs, two hounds, or two greyhounds, on a leash or brach, the leash held by Bootes, the Herdsman or Bear Driver as they pursue the Great Bear, Ursa Major, as it circles the Pole. The northern dog is named ‘Asterion’, the southern ‘Chara’. The stars of this constellation first appear in the Prodromus (1690) of the inventor of this constellation; Hevelius. According to Wikipedia some of its component stars were traditionally described as representing Bootes’ cudgel, Greek Kollorobos 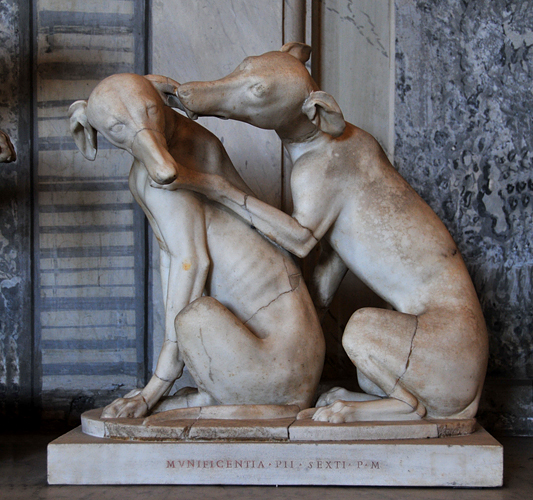 This sculpturewas found near Civita Lavinia on a spur of the Alban Hills south of Rome, and is in theTownley Collectionof the British Museum.

The word for hunting [or chasing] in Ancient Greek, kynegia, is derived from kynos (cynos) ‘dog’ []. Around AD 150, Arrian wrote Cynegeticus (“The Hunter”), a supplement in Greek to the manual of the same name attributed to Xenophon, written five hundred and fifty years earlier. Indicating how hunting and hounds have changed in that time, Arrian describes the Vertragus (or Vertagus), a Celtic breed named for their swiftness, and ancestor of the modern greyhound []. Latin vertragus, is a Gaulish word from ver– + trag (Celtic := Greek trekho, to run). [, p.119]

Canes, dogs, is the plural of Latin canis, dog. The word Venatici is from Latin vinaticus, from Latin venari, ‘to hunt, pursue’, and comes from Indo-European root wen ‘To desire, strive for’. Derivatives: win (‘to seek to gain’), wynn (an Old English rune having the sound or uu; rune for granting wishes), winsome, won¹ (achieved victory), wont, wean (to accustom, train a young mammal gradually to get less milk from its mother), ween (to think; suppose), wish, Vanir (an early race of Norse gods who dwelt with the Aesir in Asgard), vanadium (from Old Norse Vanadis, name of the goddess Freya), venerate, venereal, venery¹ (indulgence in or pursuit of sexual activity), Venus, venom (from Latin venenum, love potion or poison), Wend (to wend one’s way, from Germanic *Weneda-, a Slavic people), venial (easily excused or forgiven; a venial offense, from Latin venia, favor, forgiveness), venery² (hunting or game), venison (used to mean any meat that was hunted, but is now restricted to the flesh of deer), venatic (relating to hunting, from Latin venari, to hunt), wanderoo (a monkey, Macaca silenus, of south-central Asia, having a ruff of gray hair about the face, from Sanskrit vanam, forest, vanarah, forest dweller). [Pokorny 1. wen– 1146. Watkins] Venus is said to have derived from the eponymous mother of Venetian tribes of the Adriatic, after whom the city of Venice was also named.

The grey– of greyhound is from Old English grighund, grieghund (grig-, grieg– ‘bitch’ + hund dog), related to Old Norse greyhundr, from grey, ‘dog’, and hundre, ‘hound’. The word is not related to the color grey or gray. Vanidis (from wen above) was an epitaph of Freya, the Norse goddess of love. A greyhound, or a scenting dog, was called a brach, meaning a bitch hound. Greyhound from grig-, the translation of which is sometimes given as ‘bitch’.

“The first element of Old English grighund is grig, translated ‘bitch’: The Old Norse form of the word is preserved in Hjalti’s couplet that almost sparked war between pagans and Christians in early Iceland: ‘I will not blaspheme the gods, but I think Freyja is a bitch'” [Online Etymology Dictionary].

Windhund is what Germans call the greyhound

Venilia (a name, possibly the mother of Turnus) was named from venire ‘to come’ and that ventus ‘wind’ which Plautus mentions:

As that one said who with a favoring wind was borne

[Note by translator: *Punning on ventum: the last phrase may mean also “I’m glad there was a wind”]. [Varro: On The Latin Language, p.69].

venator ‘hunter’ from ventus ‘wind,’ because he follows the stag towards the wind and into the wind”. [Varro: On The Latin Language, p.91].

Canes Venatici comprises two dogs. “The northern of the two hunting dogs was named Asterion, and was sometimes regarded as an independent constellation or at least an asterism. The southern dog was named Chara” []. Two hounds in leash are known as a brache, which is the same word as brace, meaning pair, and embrace. Copula is the name of the Spiral Nebula, or the Whirlpool Nebula, N.G.C.5194, 51 M. in the Northern Hound, Asterion. ‘Copula’ is related to the words ‘couple’ and ‘copulation’. Venery (hunting), embraces pairs or couples and opposites; pursuer and pursued, hunter (venator) and prey (venison), and venery (copulation). The fewterer was the keeper and handler of the greyhounds in medieval and Renaissance society. They took the hounds in “couples” into the fields for the hunt, and released them at the appointed time [].

Canes Venatici, has connotations with the words Venus, and nirvana, “an ideal condition of harmony and joy”, and the Vanir, an early race of Norse gods who dwelt with the Aesir in Asgard, the heavenly residence of the Norse gods and the promised land to the slain heroes of war. Sanskrit vanam, is a forest (from wen). There is the native American’s ‘Happy Hunting Grounds’. Greyhounds were raised for deer chasing and hunting. Traditionally hunting dogs were kept in royal parks. The River Jordan was drawn on this part of the sky. In the Hebrew Bible, the Jordan is referred to as the source of fertility to a large plain (‘Kikkar ha-Yarden‘), called on account of its luxuriant vegetation ‘the garden of God’ (Genesis 13:10) [].

The fewterer, 14-15th century vewter, is an obsolete word for a keeper and handler of greyhounds in medieval and Renaissance society; the person who let greyhounds loose in a chase, “so spelt as if connected with Old English feute, the scent or trace of a beast of chase” [Folk-etymology, p.119]. Skeat says the word vewters is explained by “men who tracked deer by the fewte or odour” (with dogs). Fewterer is related to Old French veutre, Italian veltro, the name of the greyhound in Dante’s Inferno: [Notes on English etymology, Skeat, p.94, and 315]

Nehalennia of the Greyhound was a pre-Celtic goddess.

from Star Names: Their Lore and Meaning 1889, Richard H. Allen

CanesVenatici, the Hunting Dogs are the French ChiensduChasse, Hunting Dogs, or Levriers; Greyhound, the German Jagdhunde, Hunting Dogs, and the Italian Levrieri, lying between Bootes and Ursa Major. Ptolemy entered their stars among the amorphotoi of the latter constellation, and the {Page 115} modern forms first appear in the Prodromus (1690) of their inventor Hevelius. The more northern one is Asterion, Starry, from the little stars marking the body (Copula the Spiral Nebula, or the Whirlpool Nebula marks the northern one); and the other, which contains the two brightest stars (Asterion and Cor Caroli), is Chara, as Dear to the heart of her master. Flamsteed followed in the use of these names, and the Hounds are now well established in the recognition of astronomers, as is the case with most of the stellar creations of Hevelius, which were generally placed where needed.

Proctor, in his attempt to simplify constellation nomenclature, called them Catuli, the Puppies; but the usual illustration is of two Greyhounds held by a leash in the hand of Bootes, ready for pursuit of the Bear around the pole; their inventor thus reviving the idea that Bootes was a hunter.

The Chinese designated three stars in or near the head of Asterion as BanKung, the Three Honorary Guardians of the Heir Apparent.

Assemani alluded to a quadrate figure on the Borgian globe, below the tail of the Greater Bear (Ursa Major), as AlKarbalIbl, the Camel’s Burden, that can be no other than stars in the heads of the Hunting Dogs.

Bartschius drew on his map of this part of the sky the RiverJordan, his Jordanis and Jordanus, not now recognized, indeed hardly remembered. Its course was from Cor Caroli, under the Bears and above Leo, Cancer, and Gemini, through the stars from which Hevelius afterwards formed Leo Minor and the Lynx, ending at Camelopardalis. But the outlines of his stream were left somewhat undetermined, much like those of Central African waters when guessed at by map-makers thirty years or more ago. This river, however, had already existed before his day on French star-maps and globes.